I was curious as to how the four elections we have had under MMP, would have gone under SM. It was relatively simple to redo the St Lague formula to calculate this, so below are who each election would have turned out under SM:

In 1996, National and NZ First went into a coalition with a 61/120 majority. Under SM this is still a likely outcome but they would have had 64 seats instead of 61. NZ First were not that keen to go with Labour if they were dependent on the Alliance and Labour/NZF was 56 MPs so this problem still existed.

Overall it is hard to see a different outcome under SM. 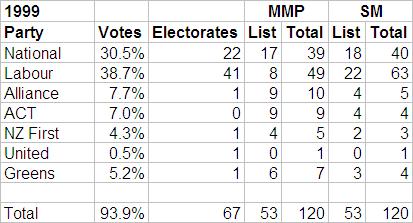 In 1999 Labour and the Alliance formed a minority Government with 59 seats out of 120. They were backed by the Greens to give them 66/120 on supply and confidence.

Now under SM Labour could have governed alone. It is possible they may have chosen to go still do a Coalition with the Alliance, but I suspect they would have been treated like the Greens – supporting players outside Government. Ironically if this had been the case, it is likely the Alliance would not have disintegrated on the Afghanistan issue. If they had not been in Government they could have oppossed troops, like the Greens did. I suspect Anderton’s ego made a bust up with Harre and McCarten inevitable at some stage, but perhaps not as early as 2002. 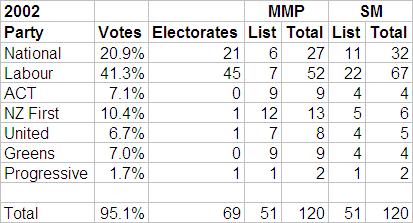 In 2002, Labour formed a minority Government with Progressive having 54/120 seats. They had confidence and supply from United and Greens giving them a total of 71 seats. Under SM they could have governed alone. 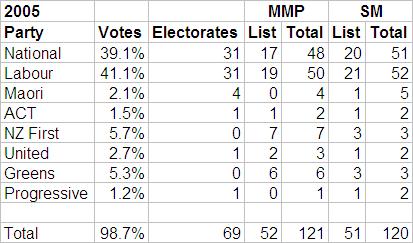 In 2005, Labour formed a majority Government with Progressives, NZ First and United having 61/120 seats. They also had agreement to abstain on confidence and supply from the Greens and a non formal abstention from the Maori Party meaning they could win confidence votes 61 to 50. National tried to put a Government together also which was in theory possible with National, ACT, United Future, and Maori Party having 57 seats but they could not get NZ First which would have given them 64.

Under SM, Labour, Progressive, NZ First and United Future would only total 59 seats so Labour would have been a minority Government relying on abstentions from Green and Maori Party. Arguably more likely is Clark may have gone left instead of centrist and done a Labour, Progressive, Green, Maori coalition which would give her 62 seats.

What options did National have, if this was SM? On 51 seats they need 10 to make 61. Assume ACT and United Future and they are at 55 seats. Maori Party would give them 60 but they would still be one seat short.

So under SM, the Alliance may have never disintegrated, and the Greens may have got their long desired coalition agreement in 2005, as Clark would have been unable to get a majority just with NZ First and United.

And in no case would there have been a different major party in Government.