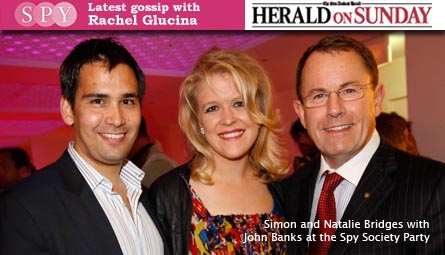 Rachel Glucina seems to be a big fan of the next MP for Tauranga, and his wife. She blogs:

Together Simon and Nat are set to inject a je ne sais quoi in to the impending election. They are the John and Jackie Kennedy of Kiwi politics, but smarter and not philandering.

Oh dear. Simon will get mercilessly teased over this. JFK II. He might want to avoid visiting Texas if Winston is there at the same time!

Natalie Bridges happily posed for my snapper Norrie with her colleagues from Simply You magazine, but she – and I found this interesting – was very careful to make sure she didn’t appear too fun-loving in the snaps. We can’t have that for the spouse of the next MP of Tauranga, she figured. And she’s right. Dignified and dainty is the way to go.

I expect Simon to win Tauranga with a very respectable majority. Some of that will be Natalie’s work!

And intelligent, too. They have to be one of the smartest couples on the political landscape. The pair met at Oxford University where she was studying English Literature; he was studying law at post-graduate level. They married at a small, ancient chapel on the grounds of Oxford and later set up home in Tauranga bringing with them a glamorous X-factor NZ politics hasn’t seen for some time.

Meeting and marrying at Oxford. Nice.

Bridges may have had a meteoric rise on our political platform, aided, let’s not forget, by Peters’ alleged memory loss, but his star is only just beginning to burn bright. Mark my words, the Bridges and their Camelot in Tauranga will be all the talk at election time.

I think it is fair to conclude, Rachel’s a fan!