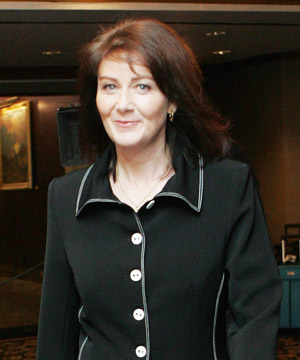 The SST has a bit of a profile on Bronagh Key. Some extracts:

Born Bronagh Irene Dougan on November 14, 1963, John Key’s wife is the daughter of Northern Irish immigrants. Joseph, a Catholic, and Irene, a Protestant, were married in Christchurch in 1960 and worked in the Feltex shoe factory.

“They were hard workers,” Bronagh told Australian Women’s Weekly. “After coming home from the factory, dad would have dinner and go out to work a second job in a hotel.”

And how they met:

A school reunion website identifies a Bronagh Dougan at Isleworth Primary School in 1974. She met her husband at Burnside High School; the 16-year-old was biking to a friend’s house reflecting, reportedly, on a failed economics exam: “I didn’t really know what I wanted to do in life. I was thinking I might join the airforce.” John Key was tutoring her friend’s sister. There was, says one report, an instant attraction.

One version of what happened next has Key taking his mother to dinner at a restaurant where Bronagh was waitressing. He asks Bronagh on a date to the local A&P Show: “While we were standing in the queue for the dodgems, he told me he wanted to be a politician.”

The amazing thing is this didn’t scare her off 🙂