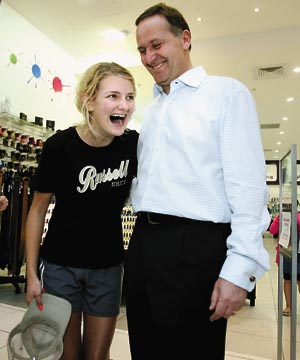 Heh I had to laugh at this story in the Dom Post:

“I haven’t been this excited since the Westlife concert,” she gasped after running the length of Lower Hutt’s Queensgate mall to meet Mr Key.

The encounter came as Mr Key went walkabout and the political groupie was prepared to go to extraordinary lengths to get there.

“My friend texted me and told me he was down, so I ran to my mum.

“She wasn’t going to bring me, so I went to put on my running shoes – I was going to run down the river – but then she said, `I’ll take you’.”

Goodness, that makes my support seem tepid and hestitant!

Yesterday I visited Queensgate Mall in Lower Hutt and was frankly surprised by the reaction.

Not one person had a negative thing to say to me in this traditionally Labour-leaning area.

There were undoubtedly people who vote Labour there, but as I went around meeting people, I was surprised at the level of support. This was particularly the case with younger people I met, who wanted me to pose for cellphone camera pictures with them.

Even the ever-present Muffin Break poll had National ahead, although I’m not sure how scientific that particular poll really is.

As I’ve travelled the country I’ve found that people are not interested in the latest desperate dirt-digging attempts by Labour, or the latest news involving Winston Peters.

People want to know what National will do in the areas they care deeply about – the economy, health, education and law and order. It is these issues that will decide the election.

The Hutt is a very strong Labour area, so that is an interesting reaction.