Legal friends have forwarded to me the judgement of the Electoral Court – civ3089_08-payne-v-adams. To save people reading the full 42 pages (except Geddis and Knight), here are some key extracts:

This is the primary reason why National did not want a bar of Payne. Breaking a written undertaking is no small thing. In fact it normally leads to expulsion from the party, let alone precluding future candidacy.

No you did not misread this. Mr Payne has had 70 court hearings on other issues, and personally sued three Judges. I almost feel sorry for the three High Court Justices who made up the Electoral Court – he will probably now go after them.

The Court finds that Payne does not even have standing to bring an electoral petition. It is all over at this point, but for the sake of completeness the Justices helpfully make findings on several other issues.

This confirms that electoral petitions are about elections – not about internal party issues around candidate selections.

And here they concur with a previous court case that the National Party rules comply with the Electoral Act.

A private group such as the National Party is not required to have “natural justice”, as per public bodies. But here the Court rules that even if there was a natural justice test, the verto of Payne’s nomination did not breach the Act.

And here the Court finds that Payne lied on his nomination form, or as they put it “made untruthful and inaccurate statements”.

Usefully the Court also finds no evidence of wrongdoing by President Judy Kirk, Regional Chair Roger Bridge, and Electorate Chair John Skinner. The former two men especially have had their names dragged through the mud by Mr Payne. 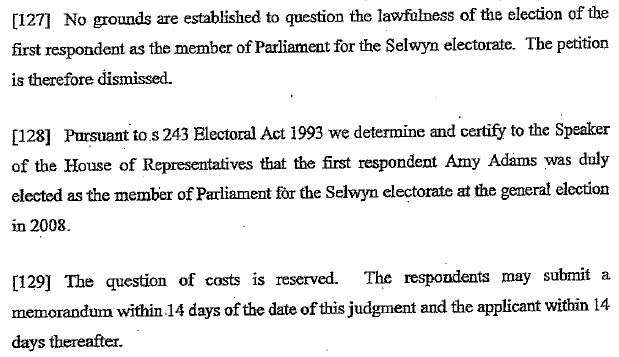 And here we have the dismissal of the petition, the confirmation of Amy Adams as MP for Selwyn and a reservation over costs.

This has cost the National Party an immense amount of money – over an issue that was always doomed to failure. Sadly I suspect that no matter what damages the Court orders paid, the party will never actually see the money.

Arguably there was some minor good from the case – the rulings on electoral petitions and candidate selections under the Electoral Act are useful confirmations of the law.