There is a nice unbroken poll series for TVNZ polls going back to 1974, being their Heylen and now Colmar Brunton polls. I thought it would be interesting to look at how new Governments have polled in the year after their election. 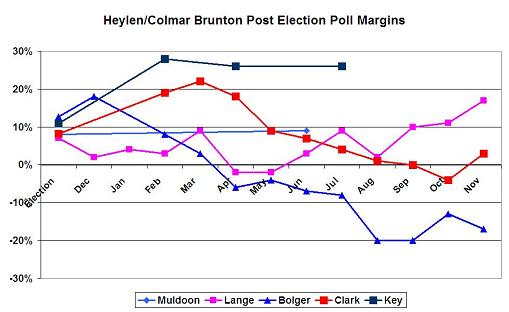 I’ve named the Government after their PMs to make it easy. Four of the five Govts were elected in Oct/Nov. Lange’s was elected in July. I considered comparing number of months after the election but in the end decided actual calendar months is easier as stuff like budgets happen at the same time.

As one can see all five Governments had an election victory margin (over 2nd largest party) of 7% to 13%.

They did not poll much in the 1970s, but six months after being elected, Muldoon had much the same lead as he had at the election.

Lange’s fell away the first six months of 1985, dropping behind National. But then it recovered in the second half and by the end of 1985 had doubled it lead to 17%.

Clark won with 8% and in the first six months more than doubled that to 22%. Then she had the winter of discontent and by October 2000 she was actually 4% behind.

Key almost tripled his margin of 11% to 28% in the first few months, and for the next six months it has stayed up at over 25%.

Every few months I’ll update this graph to chart how the Key Government is tracking compared to the last four Governments.