Destiny Church supporters parted with tens of thousands of dollars for the privilege of watching 700 worshippers swear an oath of allegiance to leader Bishop Brian Tamaki.

Church officials have confirmed “several thousand” people paid $30 each to attend the ceremony, with a $60 concession for family groups.

But costs didn’t stop at the door. Oath takers paid $295 – plus a $5 administration fee – for the ring symbolising their loyalty to Bishop Tamaki. Some were given the option of paying the ring off over time.

If he wasn’t selling God, he’d be promoting PONZI schemes or Scientology, or spamming viagra pills.

He likened the covenant’s provisions of non-disagreement with the way Prime Minister John Key would view party members espousing different views from the party line.

Ummm what a ridicolous comment. First of all there is no swearing an oath of loyalty to the Leader of a political party, let alone a detailed book instructing you to never disagree with the Leader in public.

More importantly party members express views different to the party line all the time. Hell I do it every week. 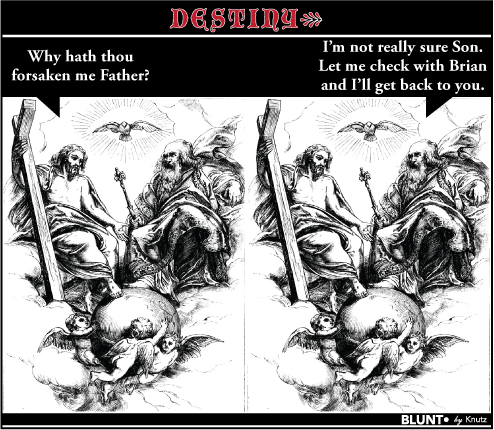 A timely cartoon from Blunt.