Great Barrier Island had its annual (since 2006) Wharf to Wharf race. Nikki competed as an individual runner (you could also cycle it, or do it as part of a team), while I took part in the more appropriate role of support person, or as the term is generally called – water boy. Nikki was running to raise $800 for the local Kaitoke school. Personally I’d rather just write out a cheque!

Now the race is basically a marathon – just 1 km short at 41 kms. But it is not a marathon around the island. It is a marathon over the island! The first 23 kms are over and up muddy mountain tracks, and as it had poured the night before, I mean muddy. The final sections are on the road, but that’s a road with half a dozen hills on it, including two which would be difficult at the best of times, let alone at the end of a marathon. 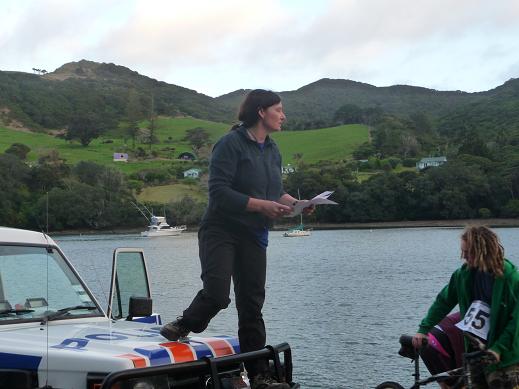 This is the briefing at the start of the race at the Port Fitzroy Wharf. I mentioned a couple of weeks ago how the local police officer, Kylie, was also the firefighter, the ambulance office and the coastguard skipper. Well she is also the race marshall! 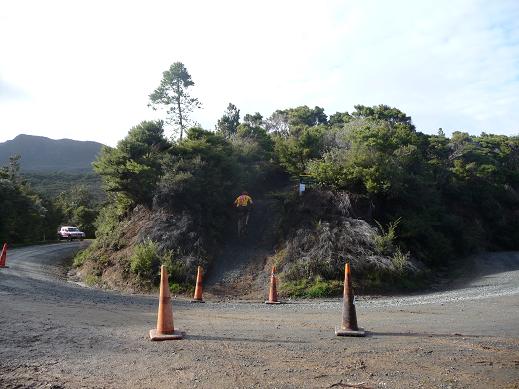 This was taken at the second checkpoint. People come out of the forest behind, cross the road and head up the steep track opposite. Tragically the very first competitor, a mountain biker, was going so fast he shot out before those helpful cones were in place. And before anyone could yell out to him he had turned left and shot down the road. He went 5 kms downhill until he realized his mistake. He had been leading by around 20 minutes. 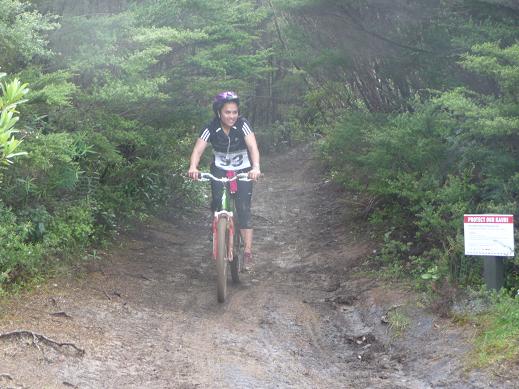 This is where they came out of at the second checkpoint. There were around 100 competitors all up. 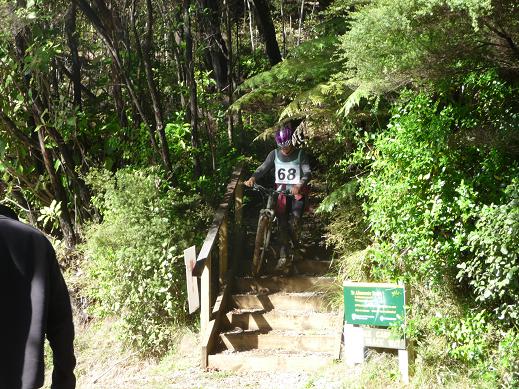 A bumpy ride down the stairs to checkpoint 3. That was the end of the muddy tracks. 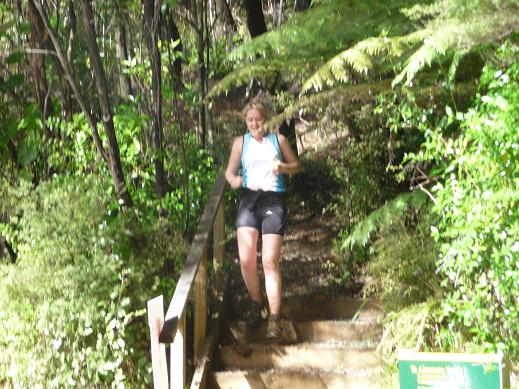 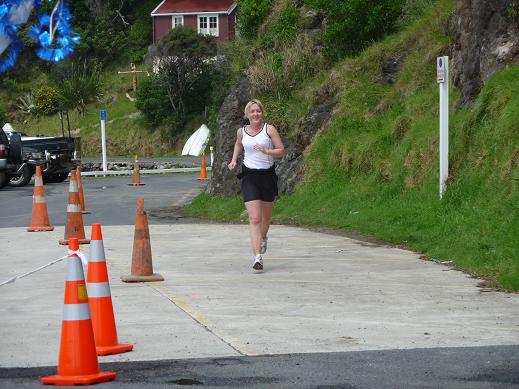 And again heading down the final stretch to the Shoal Bay Wharf past Tryphena.

The organizers did a superb job of managing the event, especially with a 7am start (meant waking up at 5 am if you are staying in Tryphena to get to Port Fitzroy in time). No competitors got lost, despite the challenges of having half of it through bush, and they even have a 4WD that picks up anyone who couldn’t finish it within nine hours. The sponsor was Great Barrier Airlines, who of course flew many of the competitors in. Was a very smooth flight in on Friday night. My connecting flight from Auckland was delayed, but a nice thing about GBA is they wait for you if they know you are late!

Nikki was the 5th fastest woman runner, which was a pretty good effort considering she is used to flat roads, not hilly, muddy tracks through bush. Of course there were only less than 100 competitors (includign biking) all up, so that makes a top 100 finish easier 🙂

The organizers are thinking of seeing if they can add an extra 1.2 kms on, and make it into an official marathon, with the title “New Zealand’s hardest marathon”. Could become an iconic event!