In a fit of good timing, the review night for Collapsing Creation at Downstage was the night before I flew out, so went along at 6.30 pm. They started early so people could make the fireworks afterwards at 9 pm.

Collapsing Creation is about Charles Darwin, and has a cast of five. Darwin himself, his wife (who incidentally was also his cousin) Emma, Alfred Thomas (an all too zealous supporter based on Alfred Wallace), John Roberts (his former agent who turns on Darwin as the consequences of his theories become clear) and the comic servant, Joseph Gardiner who brings much light relief.

The Roberts character is based primarily on Robert FitzRoy who served as the second Governor of New Zealand, after Hobson. FitzRoy captained the HMS Beagle, which with Darwin on board, visited New Zealand in December 1835.

The play is more a drama, than a comedy (but there are many light moments). The star for me Catherine Downes as Emma Darwin. She played so well this devout religious wife, whom nevertheless supported the work of her husband despite the revelations of his theories of evolution, and his eventual agnosticism.

It is hard to imagine today, when not even the Pope literally preaches creationism, what it was like in 1859 when Darwin’s publication of On the Origin of Species was published. He was a latter day Galileo in some regards. 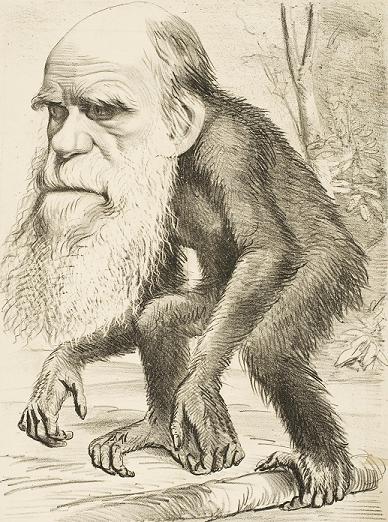 This cartoon (credit Wikipedia) from 1871 is typical of much of the reaction to Darwin.

But the play is not so much about the larger battle over the book and is theories, but more about the relationships between the five cast members. Not just Charles and Emma, but his friend turned opponent, and his supporter turned outcast.

The play last two hours, and could be a bit shorter. The first half hour was relatively slow moving, but overall it was a very enjoyable play.