At around 5 am this morning, a statue of New Zealander Sir Keith Park was unveiled on the fourth plinth of Trafalgar Square in London. 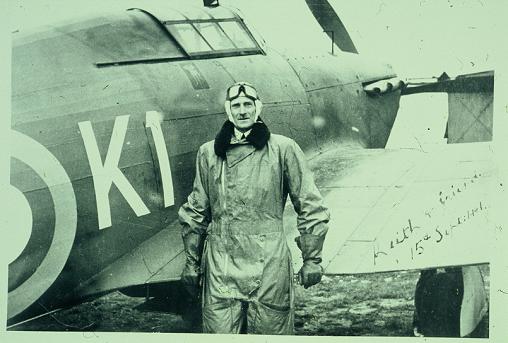 This photo of Sir Keith next to his Hurricane is courtesy of Vincent Orange and as taken in September 1941.

Many readers supported the campaign for Sir Keith to be so honoured.

The statue was unveiled by London Mayor Boris Johnson (who is in the news for coming to the rescue on his bicycle of a woman being attacked) and Air Chief Marshall Sir Stephen Dalton. More importantly it was attended by 16 RAF veterans of the Battle of Britain. There was a flyover of a Spitfire and a Typhoon.

For those who don’t know Sir Keith Park commanded 11 Group, and almost 3,000 pilots from 15 countries fought in the Battle of Britain.

“If ever any one man won the Battle of Britain, he did. I don’t believe it is recognised how much this one man, with his leadership, his calm judgement and his skill, did to save not only this country, but the world.”

Kiwis played their part in the Battle of Britain. We provided 126 pilots, compared to 33 from Australia and 98 from Canada. The ponly country to provide more, except of course the UK, was Poland with 145.

Prior to WWII, Park was a pilot in WWI and shot down 20 enemy aircraft. After WWII he returned to New Zealand and served on the Auckland City Council.