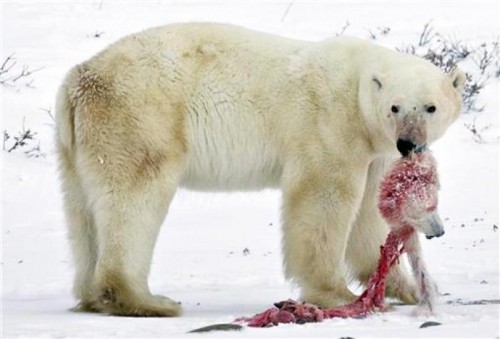 Marty G at The Standard shows off his expert knowledge of Arctic polar bears, and declares this photo shows how climate change has turned polar bears into cannibals. He says:

This is climate change. This is just the beginning.

I have a terrible feeling that this picture is an omen of things to come.

Oh yes, next there will be cannibal geckos, cannibal crabs and worse.

Or one could talk to someone who actually lives in the area, as the Daily Mail did:

But this theory is disputed by Inuit leaders in Rankin Inlet, Nunavut, who claim it is wrong to connect the bears’ behaviour with starvation.

Ignorant indeed. Unless you prefer Marty’s knowledge of polar bears to the local Unuit leader.

‘A male polar bear eating a cub becomes a big story and they try to marry it with climate change and so on, it becomes absurd when it’s a normal, normal occurrence.’

What a shame – it could have made a great film – revenage of the cannibal polar bears.