I stole this graphic from the Dim-Post who stole it from the Economist. 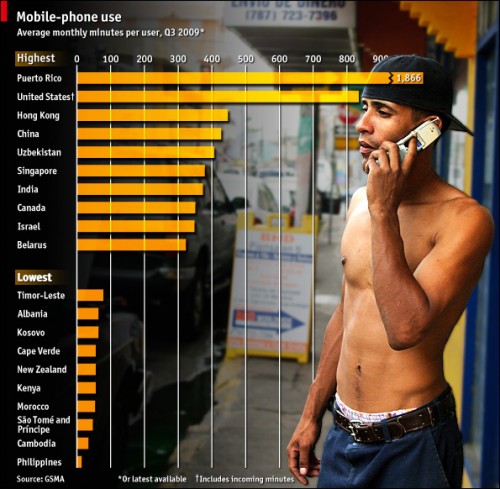 I think this is the perfect illustration of the impact the artificially high mobile termination rates have had on New Zealanders. We use mobile phones only one quarter as much as Canada and one tenth of the US. In fact we are around the level of Kenya.

Mobile phone customers will end up paying the price if the telecommunications industry is not regulated, an industry lobby group says. …

After six years of consultation, even the three commissioners considering the complex subject do not agree.

Their report will be considered by Mr Joyce, who is calling for submissions on the topic by March 8.

Consumer NZ chief executive Sue Chetwin said it was disappointing that two of the commissioners had backtracked from their views that termination fees were too high.

“I don’t think they’re coming down far enough or fast enough … [but] it’s not the end of the game yet.”

Sharing her view was Ernie Newman, chief executive of the Telecommunications Users Association of New Zealand (TUANZ), who said the recommendations were “anti-competitive”.

“It very much favours the big established operators and is hugely detrimental to any small player or new entrant,” he said.

“If the minister accepts these recommendations then long term it’s a bad outcome for consumers.

I was rather surprised that two of the Commissioners changed their mind from the draft (no doubt partly due to better undertakings from Vodafone and Telecom), because the last time this happened it was over local loop unbundling, and almost everyone one today says that in hindsight it was a mistake not to do LLU at the earlier opportunity.

I’m also bear in mind that Trevor Mallard went for undertakings over regulation when he was the (Acting) Minister. I’m not sure he is of the view that with hindsight that was the right decision – I note Labour have reserved their position on the issue for now.

I’m just glad I’m not the Minister who has to make the decision!