In April I blogged ratings for Labour MPs, initially here and a follow-up here.

I’ve now done the same for the Ministers. 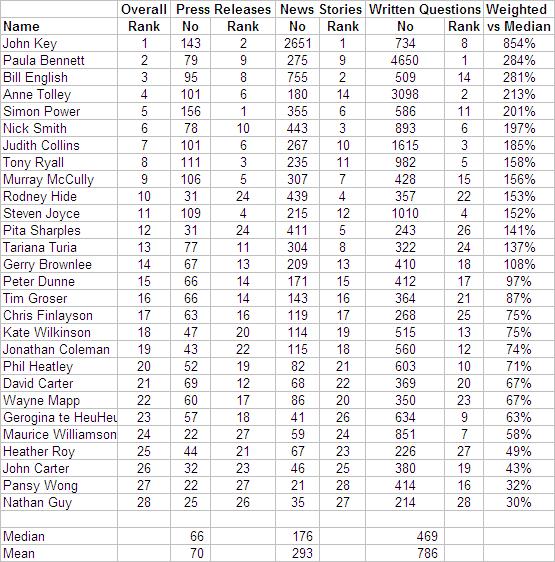 Now again these are not ratings of who are the most effective Ministers or the best Ministers. It is just a table measuring their number of press releases, the number of stories mentioning them and how many written parliamentary questions they had last year.

The overall rank is based how many releases/stories/questions they had in comparison to the median, with a weighting of 1/2 for stories, 1/3 for releases and 1/6 for questions.

Simon Power had the most number of releases at 156, followed by John Key on 143 and Tony Ryall on 111.Pansy Wong and Maurice Williamson had the least at 22. Of course what portfolios you have is a major factor.

John Key has a massive 2,755 stories mentioning him, followed by Bill English at 755 and Nick Smith at 443. The median was 176. Least mentioned was Pansy Wong, Nathan Guy (who was only a Minister for half the year) and Georgina te Heuheu.

For written questions, the Opposition decides who to ask them to, but it does indicate how targeted a Minister may be. Top was Paula Bennett who had 4,650 (over 100 a week), followed by Anne Tolley on 3098 and Judith Collins on 1615. The median was 469. Least questioned was Nathan Guy on 214, Heather Roy on 226 and Pita Sharples on 243.

I could have added in oral questions also, but for now wanted to use the same criteria as used for Labour.