Marginal Revolution blogs an amazing story from the LA Times:

The Times obtained seven years of math and English test scores from the Los Angeles Unified School District and used the information to estimate the effectiveness of L.A. teachers — something the district could do but has not.

The Times used a statistical approach known as value-added analysis, which rates teachers based on their students’ progress on standardized tests from year to year. Each student’s performance is compared with his or her own in past years, which largely controls for outside influences often blamed for academic failure: poverty, prior learning and other factors….

In coming months, The Times will publish a series of articles and a database analyzing individual teachers’ effectiveness in the nation’s second-largest school district — the first time, experts say, such information has been made public anywhere in the country.

One can almost hear the alarm bells going off in NZEI and PPTA offices around the country. You thought school league tables were bad – how about teacher league tables. And worse of all, ones that take into account outside influences, so that they do measure the impact a teacher has over time. 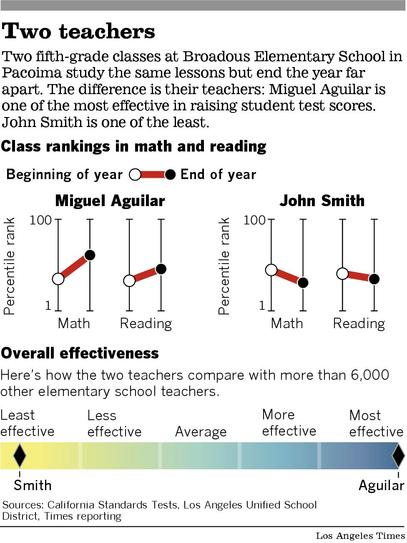 This graphic is not a mockup with fake names and made up data. These are two real teachers, and their real performance.

And consider how fiercely teacher unions fight against performance pay.

The conclusion is one that strikes home:

We cannot simultaneously claim, however, that teachers are vitally important for the future of our children and also that their effectiveness should not be measured.  As systems like this become more common students will benefit enormously and so will teachers. Moreover, I see this as a turning point. Once parents have this kind of information who will allow their child to be in a class with a teacher in the bottom ranks of effectiveness?

Oh my God. Allowing parents to choose what schools their kids go to. When will this lunacy end.

And the from the LA Times article itself:

Contrary to popular belief, the best teachers were not concentrated in schools in the most affluent neighborhoods, nor were the weakest instructors bunched in poor areas. Rather, these teachers were scattered throughout the district. The quality of instruction typically varied far more within a school than between schools.

This has been stressed back home also.

Although many parents fixate on picking the right school for their child, it matters far more which teacher the child gets. Teachers had three times as much influence on students’ academic development as the school they attend. Yet parents have no access to objective information about individual instructors, and they often have little say in which teacher their child gets.

Parents should not get any choice in which school their kids attend, let alone which teachers they have. This is heresy.

Other studies of the district have found that students’ race, wealth, English proficiency or previous achievement level played little role in whether their teacher was effective.

But it is all about the decile they live in!

No one suggests using value-added analysis as the sole measure of a teacher. Many experts recommend that it count for half or less of a teacher’s overall evaluation.

This is key. How you improve performance on such tests is not the only factor that should be taken into account. It is not a perfect measure. But it is still a pretty damn useful one.

On average, Smith’s students slide under his instruction, losing 14 percentile points in math during the school year relative to their peers districtwide, The Times found. Overall, he ranked among the least effective of the district’s elementary school teachers.

“Obviously what I need to do is to look at what I’m doing and take some steps to make sure something changes,” he said.

Isn’t that great? Rather than get defensive and decry the analysis, he is going to re-evaluate his teaching methods.

Still, Caruso said the numbers were important and, like several other teachers interviewed, wondered why she hadn’t been shown such data before by anyone in the district.

“For better or worse,” she said, “testing and teacher effectiveness are going to be linked.… If my student test scores show I’m an ineffective teacher, I’d like to know what contributes to it. What do I need to do to bring my average up?”

The real scandal is that it took a newspaper to do, what the education profession could not, or would not, do.