Labour have said that over 15 years their tax package will reduce debt by $8b. Steven Joyce says it will increase debt by $15b. Let’s have a look at where their numbers differ.

First it is worth recalling that what is undisputed is that Labour’s package will result in more debt for at least the next seven years. It is only if Labour win this election, the 2014 election and 2017 election that in their third term would their tax switch start to reduce debt – by their own calculations.

By Steven Joyce’s calculations, it will never reduce debt. At a time when debt is growing massively, Labour is actually proposing to borrow for tax cuts – they very thing they have accused National of in the past. 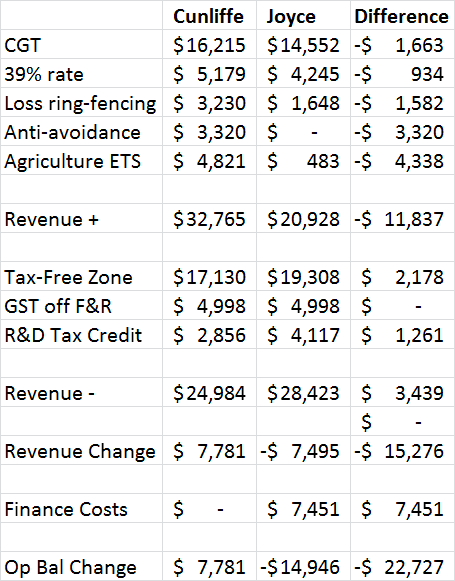 Now I’m going to go through the differences line by line. Keith Ng has also blogged on some of the differences. Keith, like me, is a former parliamentary staffer for Labour (National for me of course) so we both tend to have a more favourable disposition towards numbers from our own side. But that doesn’t mean one can’t also look at the quality of the argument.

CGT – The $1.6b difference is not hugely significant, both Keith and I agree. This is for revenue over 13 years, so the difference is around $100m a year. Joyce uses a Treasury CGT model developed in 2011, and Cunliffe uses BERL. Joyce makes the point though (which has not been covered much) that getting a CGT in place by April 2013 would be nigh impossible considering the huge number of issues being left to the expert panel. You need time to appoint panel, have the panel do its work, then draft a bill up, and then go through select committee process.

New top tax rate – Joyce has this coming in at $934m less over 13 years. Not a big difference per annum. I would tend towards the lower figure because I think it is inevitable that a top personal tax rate of 39% and a company tax rate of 28% will see massive (legal) avoidance. We already know half the top 100 earners don’t pay the top rate. This policy will probably see it drop even lower.

Loss ring-fencing. The TWG said loss ring-fencing will lead to behavioural changes, so Labour’s policy will only bring in half of what Labour says. Keith Ng basically agrees, so little dispute there.

Anti-avoidance. Labour have just invented a figure of $300m a year from greater anti-avoidance work. Now this is pie in the sky. If Labour announced actual law changes to reduce avoidance, then maybe you can estimate revenue changes. But this is the equivalent of “I hope it happens”. Keith Ng is right that it is probably not realistic to say Labour will not be able to get any extra revenue at all, but when you consider most experts are saying their tax package will make the tax system more complicated, I think avoidance will increase not decrease. In the absence of any specifics around anti-avoidance measures, I think you go with zero.

Agriculture ETS. this is basically an argument about what the price of a carbon credit will be. Cunliffe uses $50 and Joyce $25. Ng backs Cunliffe on the basis that the PCE has said they estimate the price will be $50 by 2030 if there is little international action on climate change and $100 if there is a moderate commitment. Australia’s ETS is priced at NZ$30.

However against that the current international price is 11 euros, which is NZ19 only. And bear in mind this is for the whole period 2013 – 2025. Let’s say the PCE is right and in 2030 the price is $50. Then if you assume linear price increases, maybe an average price is $35 for the period of the forecasts. So around halfway between what Joyce and Cunliffe say. Personally trying to predict ETS revenues more than a few years out is very challenging as it all depends on if a post-Kyoto agreement can be reached.

Everyone earning over $5000/year would get the benefit of the whole tax free threshold. That’s pretty much everyone in the workforce. So if everyone already gets something, how would more people get it?

The cost of a tax-threshold only grows when new people enter the workforce.

So unless Joyce thinks he can create 3 million jobs (and find 3 million workers to fill them) in the next decade, this is a patently stupid and ridiculous result. Common sense would tell you that it is impossible.

This one goes firmly in Labour’s favour.

But Keith misses a key point. It is one I have blogged on many times, but gets so little media attention. Labour’s tax free zone is not just for people in the workforce. They have pledged it will also apply to everyone on benefits, even though benefits are calculated on an after tax basis.

Labour are actually promising to increase all benefits by $10 a week – the first ever increase (beyond inflation) for over 20 years. Tax cuts have never applied to benefits in the past (as they are calculated on an after tax basis). Cullen’s 2008 tax cuts did not. But Labour is saying they will pay people on the dole more money for not working.

Also as superannuation is calculated with a floor linked to the after tax average wage, their tax free threshold will increase the cost of superannuation.

Now having said all that, National’s numbers do still look a bit high with the cost increasing approx $80 million a year, which suggest an extra 160,000 people per year working (as tax free zone is $500 of foregone revenue), on benefits or retired. So while Keith gets some stuff wrong, National’s numbers may be too high.

On GST there is no dispute, and for R&D tax credits Keith says National’s figures look more robust.

Then finally we have the biggie – finance costs, or the extra interest on the extra borrowing. There can be no debate that one should calculate finance costs, unless Labour has convinced the People’s Republic of China to loan us money at 0% interest. This is an extra $7.5 b of costs. Even if you take Labour’s numbers for some of the items, you will still have billions in finance costs.

Using Cunliffe’s numbers Labour is borrowing for at least seven years. If you go to Keith Ng’s numbers then I’d say (Keith didn’t do formally calculate this) that the borrowing is for at least a decade, and if you think Joyce’s numbers are more realistic (and for the most part I think they are) then Labour’s package is never fiscally positive.

But the up to $15b of extra debt is just the beginning. You see Labour done a big lie, and said it is a choice of asset sales or their tax package. But they have not calculated for any increased borrowing through no sales. If you add on the extra $7b they will need to borrow, then the borrowing figure climbs to up to $22b. Of course there will be over the long term less income from dividends.

But even putting aside the asset sales issue, the big big issue is spending. You see Labour’s debt track is already up to $15b higher – before they even fund a single spending promise. it is impossible to think that Labour is going to campaign on spending no more than National. Labour were increasing spending at $2b a year and National reduced this growth to $1.1b, then $0.8b and finally zero. Each time, to protests from Labour. Let’s say Labour promises an extra $1b a year of spending (they have implicitly already promised many billions through their opposition to spending reductions).

The cumulative debt from an extra $1b/year of spending is: