This is rather weird. On Thursday I was at Waikanae Beach in the morning. Drove to Wellington and then flew to Auckland. At Auckland Airport I grabbed my luggage and got on the flight to Great Barrier Island. Got to sit in the co-pilot seat which is always fun as you get the best view. You just have to be very careful not to knock or grab anything.

Anyway a few minutes into the flight the underside of my right arm starts throbbing – quite significant pain. I turn it over to see what the problem is, and I see this: 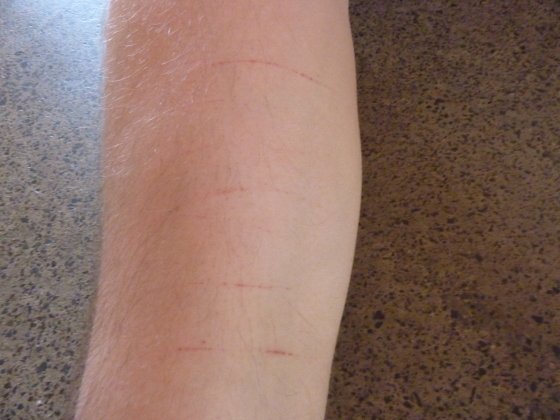 This photo was taken two days later, so have faded a bit. You can’t see all of them, but in total there were ten cuts from just above my wrist to just below my elbow. Still fairly visible five days later.

Now the weird thing is I have no memory of them. I can’t think of any activity I did which could give me multiple cuts on my arm, let alone ones I would not notice until later. If it had happened in Africa I would assume it was some bush we drove through, but this was back in NZ.

And no, they are not self inflicted – unless I have a very bad case of sleep walking. Plus they are cut the wrong way for that.

So this will have to go down as one of life’s mysteries – both how they occurred, but also why I only felt them when I was on the plane to Barrier.