This weekend has almost become play overload central. I’ve got plays Friday, Saturday and Sunday. Originally I only had A Shortcut to Happiness at Circa on Saturday night, but  then Downstage had the premiere for Live at Six (reviewed here) on the Friday night. Went with DC Girl, and we both thought it was terrific.

Then I suddenly realised I was at Coromandel for Easter and unable to make the premiere of Floral Notes, so shifted that to today. With three plays in one weekend, I was hoping they would all be very good, and so far I’m pleased to say it is two out of two.

The first thing you notice in entering Circa One is the stage set up as a typical NZ hall. It looks the part absolutely with the chairs, and the little sliding doors into the kitchen with the zip. The other half of the stage is a lounge in the home of Ned. The two sets are back to back on a rotating floor, which makes the set changes very easy.

A Shortcut to Happiness is a Roger Hall play. Now I’m not saying that this guarantees it will be a good play, but let’s just say I’ve yet to discover a Roger Hall play I didn’t enjoy. It is not by coincidence he is arguably New Zealand’s most successful playwrights. The play started with a tribute to Grant Tilly who died this week. Tilly was one of the founders of Circa, and had worked with Hall and others since the 1970s. 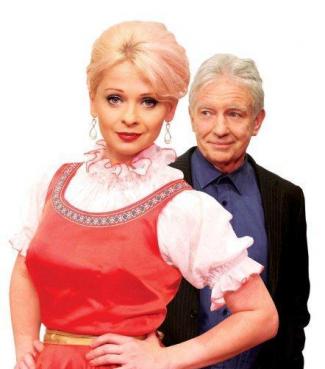 The two principal characters are Natasha and Ned, played by Elena Stejko and Peter Hayden. Natasha is a Russian immigrant who makes money cleaning and teaching dancing while trying to improve her English so she can become a music teacher. Ned is a widowed retired accountant who turns up to her classes.

Hall provides plenty of laughs as Natasha attempts and often gets wrong common Kiwi phrases, such as “from the bottom of my heart” being “from my bottom to my heart”.  Stejko is from the Ukraine, so playing a Russian immigrant is natural for her. From my experience of Eastern European women, she captures the characteristics wonderfully, including I have to say their beauty. When she changes from her dancing clothes into her cleaning clothes, the transformation is amazing. Even Glee Girl, who went with me, commented that she had the most incredible legs.

But the play is not just about Ned and Natasha. The rest of the dance lessons group provide great laughs. Jane Waddell portrays Coral the middle aged man-eater who also has designs on Ned. You also have the golf buddies Janet and Laura, and the young Sebastian who charms all the ladies, causes much tensions also.

But by far the funniest couple had to be Bev and Ray, played by Carmel McGlone and Tim Gordon. Bev is an uptight organic food eating University of the Third Age student, and Ray her hen pecked husband. McGlone is simply a comic genius – not with what she says, but her facial expressions and body language. Her performance alone is worth seeing the play for.

The play (including interval) is two and a half hours long, which is normally past my comfort zone. I generally prefer 90 – 110 minute plays. But it is a sign of how enjoyable the play was, that I never got restless. The plot advanced at a steady pace, and you were eager to see how it all works out.

It was Glee Girl’s first play in Wellington, and she also thought it was a great performance. I can’t think of too many people who wouldn’t enjoy it. It runs at Circa until 26 May.

UPDATE: I forgot the funniest line of the play. During an argument, Natasha challenges Ned saying “Don’t you hope I will sleep with you”, and his response was “Well yes, but only in the sense that I also hope I will win Lotto”. It was hilarious.