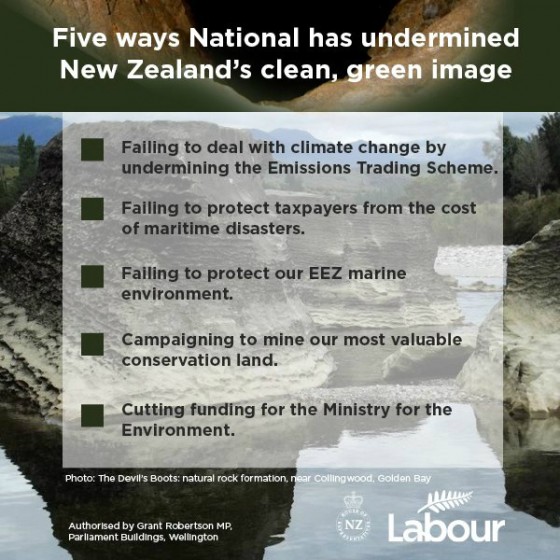 Grant Robertson has put out this pamphlet, which really needs a response. It is hard to know where to start, so let us take them in order.

This is a reference to the fact that National did not pass a law to give effect to the International Convention on Civil Liability for Bunker Oil Pollution Damage that would have doubled the liability of the Rena’s owners from $12m to $24m.

What Grant omits to mention is the convention was adopted in 2001, and Labour didn’t legislate for seven years on it, and the Labour Cabinet gave the legislation the lowest priority rating. Sure with perfect hindsight would have been good for National to have passed it, but for Grant and Labour to claim not passing the law has dented our clean green image is stupid. The impact of not having changed the law is potentially fiscal, not environmental.

National has in fact passed a law to give give environment protection to the EEZ. Previously there was no protection at all. One can dispute the balance in the legislation, but again ironic and rich for the party that did nothing to protect the EEZ to be saying that actually passing a law to protect the EEZ damages NZ’s clean green reputation while having no law at all, bolstered it!

46 wells were drilled in the EEZ under Labour – all without any legislation at all to protect the environment.

And do I even have to mention that Labour approved 218 permits for mining on conservation land – all done without harming NZ’s clean green image. You see in Labour world, it is only bad if National talks about it. It is good when Labour does it.

Now this is just getting silly. No funding has been cut for environmental activities. The $1.75m budget cut was for 12 admin staff, after a review found their admin/non-admin staff ratio was 1:10 and in most agencies it was 1:20 to 1:40.

In Labourland, I guess there are hordes of foreign tourists thinking about coming to New Zealand because of its clean green reputation, and they decide not to come because 12 admin staff were got rid of in the Ministry for the Environment!  Really, what planet do they think people live on.

I guess it is easy to stick five nonsensical bullet points on a postcard with a lovely picture as a backdrop. Far harder to actually have a track record that comes anywhere close to matching your rhetoric. I’ll take substance over rhetoric any day.