The Green Party already have the most prescriptive set of rules for their list ranking. It runs to 44 pages!

However this quota purity does not go enough for some Green Party members. Whale has leaked e-mails with a remit calling for:

Total gender equality. And you work out who is ranked number one by a coin toss so the patriarchy can’t keep oppressing. Just delightful. It seems the motivation is that some activists are upset that Russel Norman keeps getting ranked No 1 and Metiria Turei No 2, despite being nominally equal co-leaders.

Now with the Green Party love for quotas, I’ve decided to help them out. I’ve calculated in Excel the idea demographic composition for each list position for them. 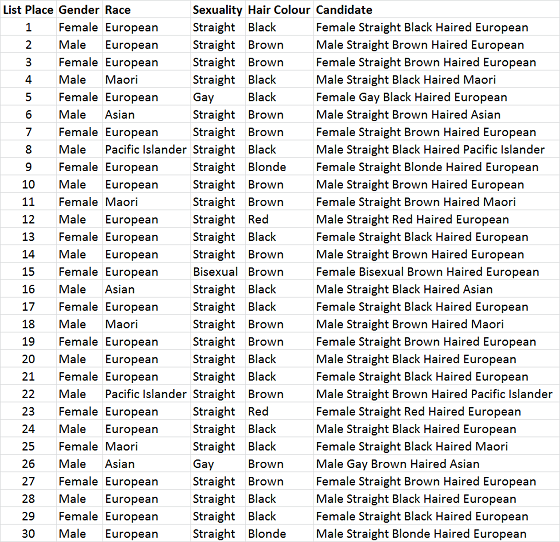 At No 15, you have a bisexual European female with brown hair. And you even have a ginga quota with No 12 being a straight male European with red hair.

This tables makes it very easy for the Greens with all their quotas. They don’t have to worry about competence, experience, skills. Or they need to do is recruit someone for each list place that meets their demographic quotas. People could apply for a specific list place, such as “I’m a straight blonde female European and would like to be considered for List spot No 9”.

Now you could argue having hair colour as a demographic quota is over the top, but look at the discrimination gingas suffer and the jokes blondes suffer from. Also you could complain people can change their hair colour. Now you could insist on a do the drapes match the curtains test, but in the end it is a human right to be whatever hair colour you feel you are. So if people wish to change hair colour to get a higher list ranking, who are we to doubt the validity of their personal choices?

Now I have not added in the age quota and regional quota their rules also insist on. I may do that in a further version.