Book of Mormon tickets are sold out almost up to a year in advance, unless you pay around US$450 a ticket for premium tickets. On our first day in New York we checked the theatre out and by chance they were having their daily lottery, where for half an hour you enter into a draw and 11 sets of 2 tickets are drawn out, which you can buy for $32 only. There’s over 200 people queued up, so your chances are around 5%, and we didn’t win.

We saw Chicago instead, which was really good. But didn’t give up on seeing Book of Mormon, and so I headed down early Saturday morning to queue up and see if any tickets were available from overnight cancellations. Jackpot – there were. I managed to get two tickets in the very middle of the theatre just six rows from the front. Perfect. And the tickets were at a more affordable price, so all go.

The show was the funniest show I have ever been to in my life, and probably ever will go to. I can’t undersell how great it was – not just the humour, but the sets, the costumes, the script, the acting, the music. At the end of the show, all 1,100 in the audience gave a huge standing ovation. 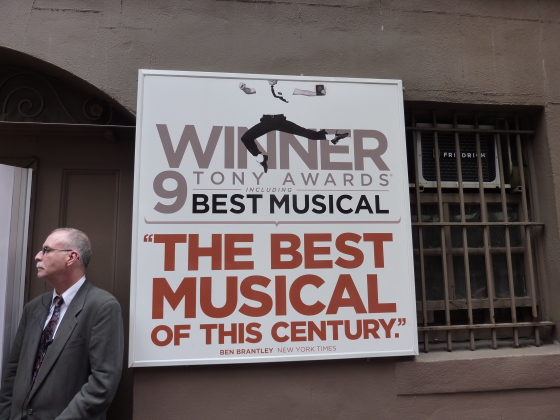 The musical won nine Tony awards, and was called the best musical of this century by a New York Times reviewer. It is by far the hardest show on Broadway to get tickets for.

The show was created by Matt Stone and Trey Parker of Southpark fan. However it is definitely not a musical version of Southpark. It is about two Mormon missionaries – the charismatic one with the huge future and the nerdy overweight one. Elder Price (The former one) is sure he is going to be posted to Orlando (his dream location) but instead gets Uganda with Elder Cunningham.

Their attempts to get the locals interested in the Book of Mormon, are hilarious. A highlight is when they are telling the locals how God cursed the Lamanites with black skin so they would not be so enticing to the Nephites (which is in the Book of Mormon). As their all black audience stares at them, they stutter and suggest they skip that part.

The villagers are more worried about AIDs, a local warlord that wants to circumcise all the women in the village, famine and poverty. Their way of coping with such gloom is to sing and chant “Hasa Diga Eebowai”. The mormon elders join in until they ask what it means and get told “Eebowai” means “God and “Hasa Diga” means “Fuck you”.

But don’t think this is an anti-mormon, or even anti-religious show. While it does mock and lampoon some of the proclamations in the Book of Mormon, it portrays Mormons as very kind well-intentioned people, and at the end of the show you have the villagers saying that they understand the book is about parables and metaphors, and not to be taken literally – so they should follow the intent, if not the the literal word.

The LDS Church has not condoned or condemned the show, and even advertise in the show programme suggesting people try the actual book, as being even better than the musical. It is a rare thing to hilariously lampoon a religion, but to do so in a way that is funny, not nasty, and even respectful in an obtuse way.

As I said, the show was beyond first class. If you plan to be in New York at any stage, then book tickets as far in advance as you can. 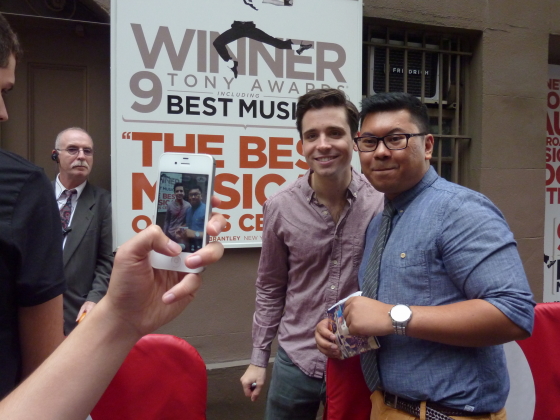 The guy on the left is Matt Doyle who played Elder Price. He has a hilarious dream scene where he thinks he gets sent to hell due to his sins, and there he meets Jeffrey Dahlmer, a very gay leather clad Adolph Hitler, Genghis Khan and amusingly famed defence lawyer Johnnie Cochran.

It’s great the stars come out after the show to do autographs and photos. 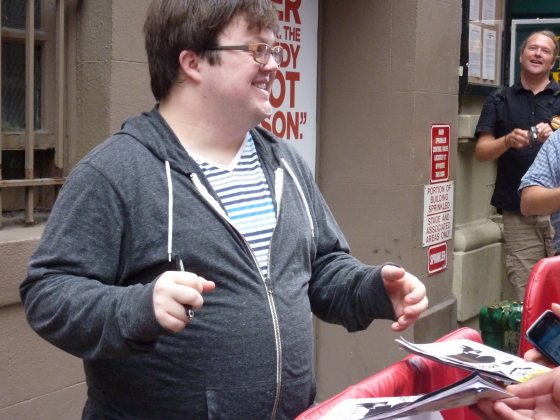 This is Cody Jamison Strand, who played Elder Cunningham. He succeeds where no-one else does, in converting the whole village to Mormonism. However he is a pathological liar, and having not read the Book of Mormon, he just invented his own. All goes well, until the LDS President visits to congratulate them, and the local village puts on a performance of their own based on Elder Cunningham’s teachings, without him knowing they planned to do this.

All I’ll say is I’ll never look on frogs the same again!

If Book of Mormon ever tours to New Zealand, I’ll be going again. Hell if I’m in New York again, I’ll try to go again. It really is the musical of the century.