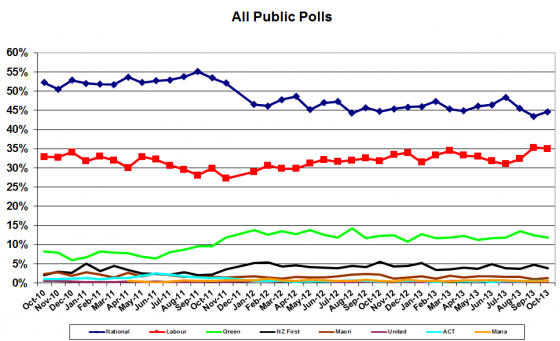 Have just published the latest polling newsletter. The summary is:

There were three polls in August, four in September and four in October

The average of the public polls has National 13% ahead of Labour in August, 8% in September and 10% in October. The current seat projection is centre-right 59 seats, centre-left 61.

In the United States President Obama’s approval rating is at an all-time low, and only 21% say the US is heading in the right direction. However Republicans also down in the polls.

In the UK Labour’ leads the Conservatives by 7%.

In Canada an ongoing scandal in the Senate sees the Conservatives a just 29%.

The normal two tables are provided comparing the country direction sentiment and head of government approval sentiment for the five countries. The mood has improved in Australia but plummeted in the US.

This newsletter is only available by e-mail.  If you would like to receive future issues, please go to http://listserver.actrix.co.nz/cgi-bin/mailman/listinfo/polling-newsletter to subscribe yourself.