Have just published my monthly newsletter summarising the polls last month. The summary is:

Australia has seen the Labor Party and Gillard rebound massively. They are now tied with the Coalition in one poll, and Gillard’s approval rating has improved by a net 14%.

In the United States things were going well for the Democrats up until the first debate. Barack Obama remains slightly ahead of Mitt Romney in the polls, and further ahead in likely electoral college votes – but the gap has narrowed. His re-election chances on the Intrade market are now 62%. On the plus side, his approval rating has gone positive for the first time, and over the last two months country direction sentiment has improved by a net 15%.

The Republicans remained favoured to keep control in the House (88%) but have plummeted to only 27% probability to gain a majority in the Senate.

In the UK the Conservatives remain 10% behind Labour.

In Canada the Conservatives have are 2% ahead of the NDP, at 33%. The Liberals remain in third place at 22%. But Justin Trudeau (son of Pierre) has just announced his bid for the Liberal leadership, and polls indicate he could boost the Liberals into first place if elected.

The normal two tables are provided comparing the country direction sentiment and head of government approval sentiment for the five countries. New Zealand continues to top both.

We also carry details of polls in New Zealand on, same sex marriage and adoption, school data, breakfasts for schools, the next King, euthanasia, plus the normal business and consumer confidence polls.

This newsletter is normally only available by e-mail.  If you would like to receive future issues, please  go to http://listserver.actrix.co.nz/cgi-bin/mailman/listinfo/polling-newsletter to subscribe yourself. 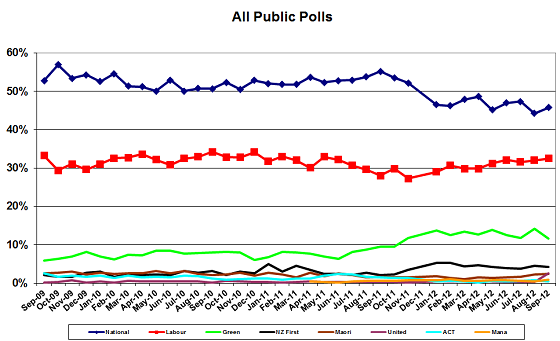 This graphs is to the end of September, so excludes the polls out in October so far.