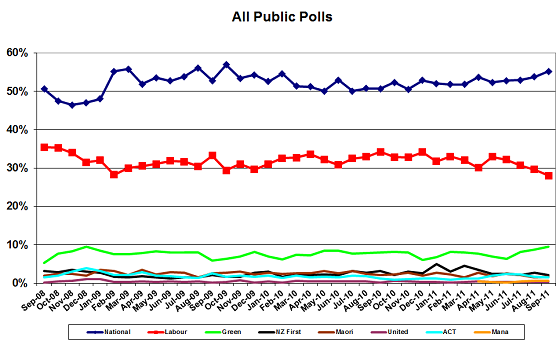 The average of the public polls for the last three years, on a monthly basis, is shown above. It includes the two polls published last night as they were undertaken in September.

The graph is from Curia’s monthly newsletter, whose summary is below:

The average of the public polls has National 27% ahead of Labour and able to govern alone. The gap in August was 24%, so the gap widened in September. The gap has grown every month from 19% in May to 27% in September

Australia still has the Government 16% behind the Opposition, but Gillard’s personal ratings recover slightly.

In the United States Barack Obama approval ratings remain low at a net -11%. His re-election chances are rated at 48%, close to even odds. Texas Governor Rick Perry has lost much of his momentum from last month and Mitt Romney is back as the front-runner for the Republican nomination.

In the UK Labour have just had their annual conference and lead by 5%.

In Canada the Conservatives solidify their position up 2% to 39%.

Two tables are provided comparing the country direction sentiment and head of government approval sentiment for the five countries.

We also carry details of polls in New Zealand on the Maori seats, the Rugby World Cup, the Maori Party, the Christchurch earthquake, Labour’s leadership and the normal business and consumer confidence polls.