by John Stringer, a Christchurch spy in Jaffaland.

I was in Auckland last night, so went along to the first election debate for 2014 which kicks off the 2014 campaign. 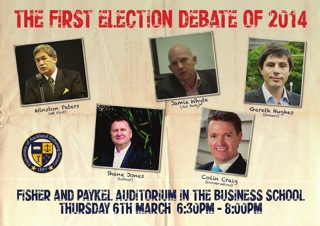 Organised by the Dept. of Politics. Gold coin entry, so not a free-for-all.

Gridlock Auckland traffic delayed the debate 20 minutes as not all speakers could arrive on time.

Winston Peters was a no-show. Colin Craig was the last to arrive and received a celebrity welcome.

According to Patrick Gower of TV3 interviewed on RadioLIVE Marcus Lush this morning, the night went to Colin Craig, who was received as something of a rock celebrity, with students queuing up afterward to get a selfie with him.  As reported here. Craig was the last to leave,

The format was two minutes each, on the following:

Debate commenced with a humorous address by

Colin Craig, Conservative who opened with “honesty” and  some anecdotes about fishing and rugby and blew a whistle (“invented by a NZer,” ie innovation).

John Minto, Mana.  Read his speech, standing for the poor and those left behind by 30 years of neo-liberalism, and those slipping backwards through inequality and poverty. Attacked the “obscenely rich.”  Will abolish GST and feed kids at schools.  Also promised jobs through regional development and to “abolish the dole.”

Te Ururoa Flavell, Maori.  Patrick introduced him as “T-Flav.”  Spoke about Maori Party’s protest beginnings (Foreshore and Seabed); Clarified his party not just for Maori. Shared values between Pakeha and Maori.  Emphasised cooperation with National but holding National back on key policies, such as environmental protection under RMA.  Keep National honest and moderated.

Shane Jones, Labour.  “Explained Colin was welcome, we waited, it’s a long way from the Moon.”  Fairer more equitable power system in NZ; going to introduce a capital gains tax. Assistance for families with a  parent staying at home.

Jamie Whyte, ACT. Began very quietly, lectured on nature of what we think politicians do. Said ACT rejects current definitions. Property rights discussed in context of Foreshore and Seabed.  Education as a consummable and economic sovereignty for all.

• Why no capital gains tax? Craig said CGT doesn’t drive down prices for housing; its not an answer its an impediment.

• Minto supported CGT. Gower to Hughes: why only on housing? Hughes: over investment in housing, locked up and not spent on innovation, IT, clean-tech which are all capital starved.

• Gower to Ross, why National not helping with housing?  Ross agreed with Craig, that  a CGT won’t work (cited Australia) and said Labour was being disingenuous.

• Jones said Gower’s face is “made for radio.” (slightly booed for that) which he called ‘The Derp face.’  Avoided the question and put a plug in for lifting the retirement age.

• Whyte: opposed to CGT, capital has already been taxed as savings on income. Said land prices are artificially scarce which has pushed prices up.

• ACT opposes minimum wages; can’t legislate incomes and minimum wages pull people out of the labour market.  People need skills. Unfair as it imposes a burden on employers and the consumers of goods; artbitrarily allocates the policy to those doing the most – providing the jobs. Spread the problem across the whole population.

• Jones. Labour will put up the minimum wage, a living wage, Working for Families; challenged listeners to think about whether people can afford to live on $13.50?

• Flavell talked about struggling workers on low incomes, part time workers, and being unable to fulfill their obligations as parents. Set min. wage at $16.00; and $18.80 as a Living Wage.What’s good for Maori is good for NZ, look after the lower end.

• Ross. Only 4 countries in world that have a higher minimum wage comparatively with NZ. [This stat. was later broadly challenged by Gower and several speakers]. Increased it every year they’ve been in office. Ramping up min. wage increases unemployment. Grows welfare, we need more jobs; growth of min wage naturally rather than arbitrarily.

• Minto. Mana would make living wage ($18.80) the min. wage.  Compared the workers’ share of income over several decades; lower now than it was.  He swore the most. “If bullsh*t was tarseal, you could road the whole country with all of National and Acts policies about this.” Called people bloody bastards and pricks.

• Craig castigated Minto, that he probably paid more tax than Minto did, and at a higher rate [to applause from audience]. Attacked National’s tax cut but said they had been misapplied.  Favours tax cuts better targeted where it benefits most.

Gower challenged Ross’s figures re only 4 countries having higher minimum wages, and min wage rates internationally. Ross spilled anti-Labour statistics on wages. Gower said Labour’s policy was closer to National than Greens or Maori, Jones said to wait for the election. Whyte cited Singapore and Switzerland as nations without a minimum wage. Whyte attacked Labour’s arbitrary pricing of min. wage, because they know “damn well that $20 would create mass unemployment.”

Gower to Hughes: would it cost jobs? Greens support it because it’s fair; couldn’t clarify if it was a Green priority to push Labour up on the min. wage.  Minto attacked the rich, called them vicious, and tired class struggle rhetoric. Gower challenged him. “Are you saying Colin Craig is a bludger?”  Craig replied Consv. intends to close tax loopholes and largely in agreement with Minto.  Gower was shocked…“Conservatives and Minto in Coalition!”  Craig then traversed over to Education as a metaphor for success and equity regarding income and paying tax.

Gower asked each speaker what their personal drinking was.

• Jones: drinking is a conscience issue for him. Not convinced minimum pricing of alcohol will change NZ drinking habits. Cited Geoffrey Palmer’s reforms but disagreed with whipping caucuses on this issue.

• Ross.  Doesn’t drink. Supports age at 18. Agreed with reducing blood/alcohol levels and zero-rating at age differentials.  Access to alcohol should also be restricted.

• Hughes. Drinks a few beers a week. Disagrees with targeting youth; it’s a societal and historic problem. Cited stats re youth drinking being down comparatively.

• Whyte, “I’m a slow and steady drinker..I always knew I had it in me.”  [Big applause]. Alcohol should be regulated, but by individuals not the State.  Opposed regulation of venues, should be done by pub owners.  Supported the 18 year age limit.

• Flavell drinks one beer a week.  Moved to Maori policy on tobacco and a smoke-free NZ, and gambling. Maori to attack these issues by addressing price, advertising, marketing and branding as well as caring for those affected by the results of abuse.

• Craig is a light social drinker, beer and wine. “Depends on the number of BBQs.”  Spoke about the reports and the huge costs of subsidising this problem, such as hospital admissions. Most violent crime fueled by alcohol. Audience went quiet while Craig talked on these issues and he got the loudest clap of the night on this topic which seemed to resonate.

[Aside] Have You Ever Smoked a Joint?

Gower asked Craig if he’d spoked a joint and if he supports decriminalisation of cannabis. He may have passively smoked at Auckland University “in the Quad.”  Craig attacked libertarianism, saying people can’t do what ever they want because it affects other people.  Decried synthetic cannabis.

Gower asked Minto, who had smoked a joint.  His personal view is that marijuana should be decriminalised.

Hughes: “I’m a vegetarian Greenie who used to sail on the Rainbow Warrior, what do you guys think?”  Prohibition doesn’t work, supports decriminalisation.

Flavell.  Utterly opposed to decriminalisation because of the severe damage he sees in his communities.

Jones. “I come from Kaitaia, so…”  Not a smoker. Grows like a weed in Kaitaia, not interested in supporting decriminalisaion.

4. Tertiary Education.  What is the best funding model?

• Ross. Talked up the heavily-subsidised system we have now. Ross suggested Winston Peters didn’t bother to turn up, as the 600 people present did not represent his demographic.

• Minto.  All the speakers, except perhaps for Gareth, got their educations for free. Labour brought in student fee as and National increased them, now at a level above infaltion. Mana wants tertiary education and all education) free for citizenship.

• Craig. The country, universities and students are going into debt to pay for the current system, because we pay for bottoms on seats. We need a more varied system, compete for it and make our universities the best in the world.  Disagreed with Minto’s approach.  Mass education through university (bums on seats) was not the way to go was well supported by the audience.

• Flavell. Unfairness in sector due to price hinderances for many people.  Maori want fee reduction policies, a universal student allowance, set at the same level as the unemployment benefit, and repayments set to actual earning levels.  Maori wants to decrease student debt.

• Jones. Praised the scholarship he received that gave him access to tertiary education.

The debate finished with questions about University Councils.

Overall the debate was good-willed with a few barbs and a tenor of university humour as led by Patrick Gower’s deprecating style.  The 2 min. session game time for each speaker to get away some content and policy substance. Jones was the most humorous but suffered from cheap-shot syndrome trotting out the predictable recycling of his colleagues hiccups.

Gareth Hughes did very well, he was polished and got his party’s bullet points away (which surprised me) as I’d debated with him recently, and he was not nearly as good.  Jamie Whyte has a long way to go, nice man, but like Richard Prebble says, “not a politician.”  Ross held the flag for National; Minto seemed from another decade; Craig had lots of celebrity support and was given the night by Gower. Flavell injected a much-needed different perspective on many things, which enriched the debate.  It was a bit long at 2 hours.

The two best spears in my view were Hughes and Craig.  Jones was the funniest but a bit of a buffoon.

Most humorous line of the night was probably Hughes re Rainbow Warrior joint-smoking or Gower mocking Whyte over Incest and Polygamy.