I saw Other Desert Cities at Circa this week.

It’s a local production of the play written by Jon Robin Baitz, which was a Pulitzer Prize finalist and nominated for five Tony Awards in 2012. Baitz wrote some episodes for the West Wing and created the Brothers & Sisters TV show.

The play is set in 2004 (and 2010) about the Wyeths, and the family, social and political tensions that threaten to tear the family apart. It is directed by Ross Jolly

Lyman Wyeth is the retired father who is a likeable patrician. He is a former senior GOP Chairman and US Ambassador, and his conservative views are not shared by his New York based daughter and to a degree his son. Lyman is ably played by Jeffrey Thomas (played  Thrór in The Hobbit) and you really would think he is America (actually Welsh) with his accent and mannerisms.

Polly Wyeth is the “hard arse” mother who is pretty unlikeable, and pushes her children hard as she thinks weakness means they will fail. She is reputed to have once reduced Nancy Reagan to tears, and Catherine Downes does well in bringing her to life.

Polly’s sister Silda adds a lot of comic value. She lives with them as she is a (recovering) alcoholic. Emma Kinane has fun with the role, and she is a real contrast to her sister. 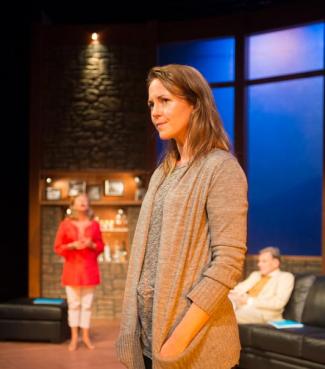 The protagonist is daughter Brooke. A New York based writer who had a breakdown, partly caused by the suicide of her brother after he took part in a terrorist bombing of a military installation. She has finally written her second book, but what her family don’t know is that the book is about the death of her brother – and what drove him to it. Michelle Langstone excels in portraying Brooke as both strong and vulnerable.

The family feel betrayed by her writing about such a personal tragedy to them, and even worse her parents feel they are being blamed and vilified for it.

As with all good plays, there are some wonderful surprises and twists in the plot. The play is two and a quarter hours long and has bucket loads of drama, and a reasonable dose of humour.

The US accents are near flawless, and the director told me they had a special voice coach for them. You really would think it was a production with US actors.

The acting is excellent, both with the script, and the body language.

I found the portrayal of the parents slightly too stereotypical for comfort, but stereotypes are often false – and the play is a good reminder of that.

Overall a very good drama, and a satisfying – if somewhat mysterious ending.