I saw on One News last night that there was a march and rally in Auckland about child poverty. The purpose of the rally was stated to be seeking cross-party discussions and consensus on how to reduce levels of child poverty.

National MP Alfred Ngaro turned up and tried to speak. The fact Alfred was blocked from effectively speaking (shouted down), shows that the rally was not about child poverty, but an anti-National rally.

Has there ever been a child poverty rally when Labour has been Government? This is a serious question?

I know there are groups like CPAG that have advocated for particular policies to reduce child poverty, under both National and Labour Governments. But the public stuff such as marches, and rallies, I don’t think ever occurs when Labour is in. That implies for many (not all) of those involved this is a means to an end (get Labour into Government) rather than genuine concern for the issue.

Some may say there is no child poverty when Labour is in Government, and it gets worse when National is in. Well look at this graph below: 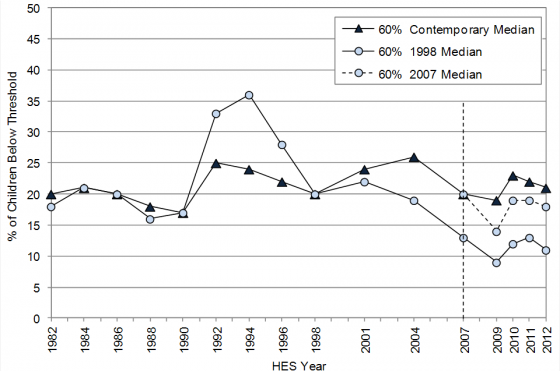 Graph is from Child Poverty Monitor.

Now I’m not a big fan of this measure.  I prefer the measure based on material hardship, rather than one based on relative incomes. But this is the measure the left cite most often. So what does it show (using contemporary median).

From 1998 to 2005 child poverty increased significantly under Labour. It then dropped back to 1998 levels by 2007. Since then it declined a bit further, increased in 2009/10 and had been gradually declining since. It is lower now than it was under most of Labour’s terms.

That isn’t to say it should not be lower. I doubt there is a person in NZ who thinks a child should have a materially deprived childhood. But there is a genuine difference of opinions on the best way to achieve this. Those on the right tend to think moving families off welfare into jobs, job creation, targetting the bottom 20% of educational underachievement, parenting skills and even less crime in neighbourhoods are what is best for struggling families. Plus a big belief in targeting assistance to those on lower incomes and that charities and NGOs have a role to play.

Those on the left tend to believe that higher levels of welfare payments, universal subsidies, direct state provision of services are what will help most.

One can disagree on the best policy mix, but still respect that others sincerely believe their policies are best and will do the most good.

I hate how the left try to claim that National doesn’t care for low income families.

UPDATE: Lindsay Mitchell has an excellent blog post on how relatively low income and deprivation are not the same thing, and also fisks some of the stats used by campaigners.