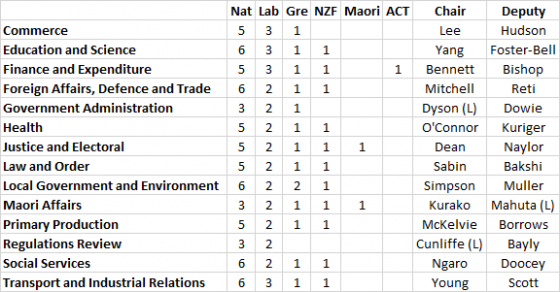 The composition and chairs of select committees has been decided. Well, almost decided. NZ First seem unable to decide as quickly as other parties which MPs go on which committees. Ironic as they have just 10 MPs.

National has a clear majority on 10 of the 14 select committees.

On Finance and Expenditure the swing vote is ACT’s David Seymour. If Labour are smart (unlikely) they’ll look for issues they could get him on board with such as an inquiry into corporate welfare.

Government Administration is tied between National and Labour/Greens and chaired by Labour MP Ruth Dyson. That is normal for this committee.

Justice and Electoral could be tied with five Nats, two Labour, one Green, one NZ First and one Maori Party. But chaired by National’s Jacqui Dean so unlikely to have issues.

The Maori Affairs Committee has eight MPs on it – three National, two Labour, one Greens, one NZ First and one Maori Party. So National can be outvoted, but if Maori Party vote with them, it is a tie and new National MP Nuk Kurako is its Chair.