[UPDATE 5.27] Crist has conceeded to Scott in Florida

[UPDATE 3.17] Been offline because an electrician was here

Scott still leading Crist in Florida Governors race. 49-46% 97%   counted. The GOP will be getting hopeful of a win. Senate GOP +3 pickups

Virginia Senate  race between Warner (D) vs Gillespie (R). much closer than expected

[UPDATE 1.15] Fox and RCP are calling Kentucky for McConnell

[UPDATE 1.00pm] The first polls close in 6 states any moment

This post will be updated as results start coming in. The first polls will close at 1pm (NZ time).

It is election day in the USA with seats in the Congress (House and the Senate) up for grabs. There are also key Gubernatorial contests. There is much interest in the battle for  the US Senate with Republicans looking to take control off Harry Reid and the Democrats.

DPF posted his take on the mid-terms yesterday.

There are 36 seats being contested. Currently Democrats hold 55 (includes two independents who caucus with them) – Republicans 45.

Here are the results of the opinion polls from the key seats as analysed by Real Clear Politics and Five Thirty Eight yesterday: 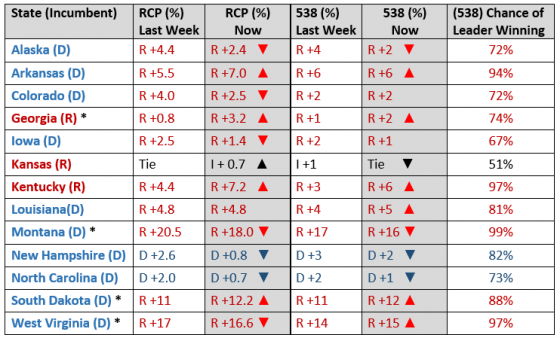 There are 36 states with elections for Governor. Currently the Republicans hold 29 governorships and  the Democrats 21. Here is a brief summary of some of the more interesting contests (incumbent has asterisk).

Florida: Scott (R)* vs Crist (D)- This has turned into an intense dogfight with former Republican turned Democrat Crist narrowly ahead in the polls. Both sides have brought in the heavy hitters to promote their candidate. No love lost here in this bitter contest with a total of $US150 million spent by the two campaigns.

Wisconsin: Walker (R)* vs Burke (D): The battle hardened Walker is fighting Burke and the Democrats who have been desperately trying to get rid of him for years. If successful Walker is seen by pundits as a candidate for the presidency in 2016.

Kansas: Brownback (R)* vs Davis (D): This is normally a strongly leaning GOP state but Brownback is unpopular with many partly because of a poorly implemented tax cut policy. He has been behind in the polls.

Illinois: Quinn (D)* vs Rauner (R): Normally a Democratic state but polls show this as being very difficult to pick.

Colorado: Hickenlooper (D)* vs Beauprez (R): The polls have this being practically a tie currently.

All 435 seats are up for re-election. The House hasn’t got nearly near as much coverage in the US media probably because the GOP will almost certainly retain control and may pickup more seats.