Here is the latest numbers using as before the Real Clear Politics average of polls data and Nate Silver’s numbers. A reminder the current numbers in the Senate are Democrats 55 – Republicans 45. 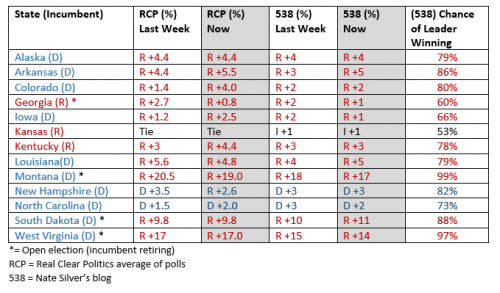 In Colorado a state which Obama won in both 2008 and 2012. Nate Silver and the Washington Post think that Democrat Mark Udall is now in real trouble. His campaign based around women’s issues hasn’t hit the right spot with the voters. Iowa remains close with Joni Ernst (R) holding on to a slender lead. Iowa is always a bell weather state on election night.

Georgia has got a lot closer with Democrat Michelle Nunn making David Perdue (GOP) work very hard. Some polls have Nunn ahead. Kansas is still pretty much a dead heat between Orman the independent and Roberts the GOP candidate.

So based on these numbers the Republicans look like they may pick up 8 seats (Alaska, Arkansas, Colorado, Louisiana, Iowa, Montana, South Dakota, West Virginia). But are not guaranteed to win Georgia and Kansas just yet.

So it’s definitely advantage to the Republicans with less than 2 weeks to go.

[UPDATE] The web link to the Washington Post article cited that discusses the Colorado Senate race was broken and is now working.

[UPDATE 2] The Louisiana and Georgia Senate Races are run under the 50% plus one vote rule. So if no candidate achieves this a run off is held. If required the Louisiana runoff is scheduled for 6th December 2014. The Georgia run off would be held on 6th January 2015. Hat tip to Kiwi in America for reminding me of this.