Here are the latest numbers from the Real Clear Politics average of polls and from Five Thirty Eight in the key Senate races. 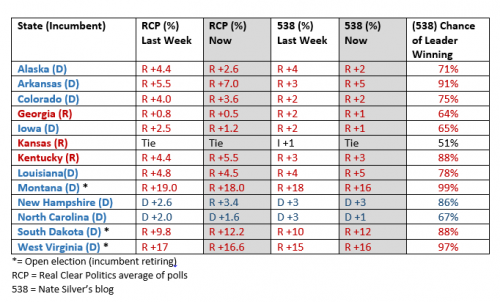 NOTE: Georgia and Louisiana have the 50 plus 1 vote rule in place. If this is not achieved by the leading candidate a two way run off  election between the two highest polling candidates will be held.

Currently Democrats hold 55 seats (including 2 independents) and the Republicans 45. So the GOP needs to make a net gain of 6.

The GOP will pickup Montana, South Dakota, and West Virginia. They look good to also pickup Arkansas and Colorado. That would give them 50 seats. So what of the other seats?

So it’s still advantage to the GOP if the polls are right but it isn’t a done deal yet. If they lose Kansas and Georgia they would need to win three out of Iowa, Alaska, Louisiana and North Carolina.