It has been conventional wisdom for the last few months that the Democrats will retake the House. They have done very well in special elections and have had a huge lead in the generic ballot.

But things are getting tighter. 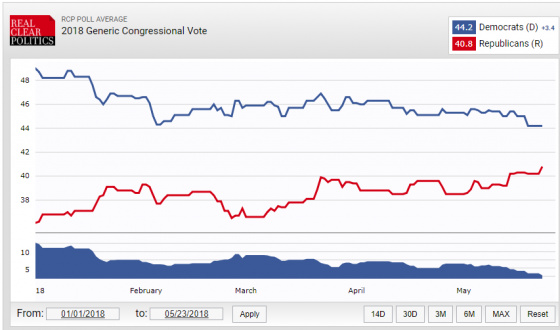 This is the RCP average of the polls of the generic ballot.

The Cook Report looks at the likely seats based on safe, likely, lean and toss-up. at each stage the numbers are:

So the Dems need all the tossups and some of the leans to go their way. That is possible but needs a big surge. A 3% generic ballot lead is not enough. However the ballot may not take account of enthusiasm. Dems may be more motivated.

But if Justice Kennedy announces he is retiring from the Supreme Court, then GOP voters will be very motivated to turn out for Senate elections.