We set off around midnight and the weather seemed perfect – no wind, and a clear night. The Southern Cross and Milky Way Galaxy were prominent in the sky.

It was however very cold. Going uphill with so many layers of gear on is exhausting work, especially when you have much less oxygen to breathe compared to normal.

The main challenge is to climb around 950 metres to Gilmans Point. Then after that it is a further 60 metres or so to Stella Point at 5,739 and finally Uhuru Peak at 5,895 metres – around 1,200 metres up from Kibo Hut.

The track to Gilmans is incredibly tough. First of all you can’t see it. You just follow the person in front of you. You can vaguely see some ridgelines but don’t know how far away they are. After a couple of hours of trekking, we had no idea how much more we had to go. We had been told six hours is normal, but our guide had said it may take seven and a half hours to Gilmans.

The path is steep. It is a 4 km track which rises 1 km vertically. So for every four metres of track, you go up one metre approx. There are basically no flat sections, or even gentle zig zag slopes. It is just relentlessly upwards.

To make it harder, some parts of the route go over scree. That nasty stuff where you slide back 80% of the step you take.

We take a 10 to 20 second breather around every eight minutes or so (Basma is counting to 300 slowly in Arabic between pauses) and every 45 minutes or so we do a proper stop where we sit down and have some food.

After three hours or so we seem to still be leagues away from the top. We need to not only get to Gilmans, but then to the peak, and then descend 2,000 metres or so to Horombo Hut – all of which is a good eight to nine hours on top of the time it takes to get to Gilmans.

I’m on the verge of quitting half a dozen times. The reduced oxygen and five lawyers of clothes is exhausting. And even with so many layers, you’re still cold. But so long as the others keep going, I’m determined to. I do make a mental note though to learn to say no, the next time someone asks me to do anything which involves going over 4,000 metres above sea level – unless a plane is involved.

The mountain side looks like a series of fireflies with torch lights both above and below us.

I’m most fearing three things which would force me down. Around 3 am the sky clouded over and the rain may be a matter of when, not if. Trudging up in the rain for hours on end would be too much. Likewise if the wind picked up, it would get too cold. Luckily neither were eventuating yet.

My other fear was when the altitude sickness I had in the Himalayas would strike. I had headaches for around seven days, and that was ascending just 500 metres a day, while this was double that. It previously struck around 3,800 metres and we were now over 5,000 metres.  The altitude training I did with Altitude Inc paid off. I mumble thanks in my head to Hayden Wilson for recommending them, and to their director Bronwyn for arranging a portable unit I could use in my apartment right up until I left Wellington.

The pauses are becoming far more common now. For a while we were doing 10 seconds trekking, 10 seconds pause as we started to fade. It was still pitch dark, and we had no idea what the time was, and how much further to go. A guide said he thought we had around an hour to go to Gilmans. 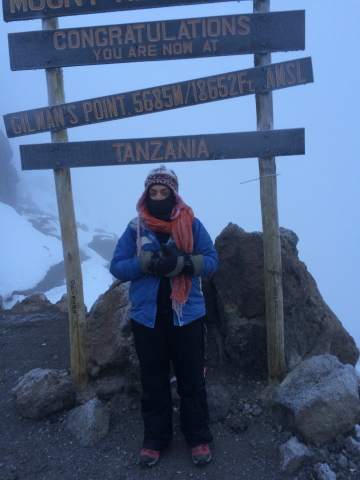 Suddenly ten minutes later we come across a sign. We think it must be a sign to tell us how far to get to Gilmans, but we are at Gilmans. It’s around 5,30 am – we even got there before the sunset.

Much hugging and high fiving follows. The biggest emotion is relief. All four of us have made it to the top ridge of Kibo. We’re not at the summit, but we are at the point where the National Park will recognise you as having climbed/trekked Kilimanjaro.

It is still dark, so we decide to go to Stella to see the sunrise. Basma has had problems with her jacket and gloves and is freezing, so she decides (wisely) to start going down a bit before we make Stella. 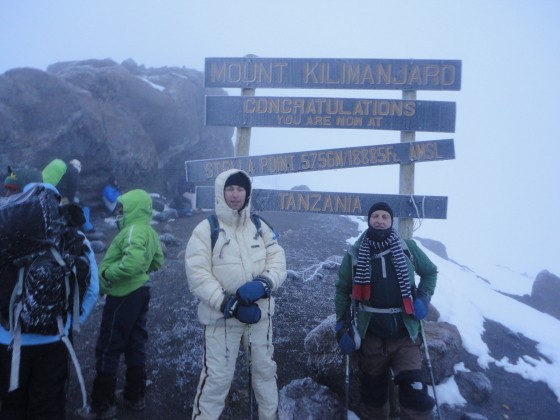 The path to Stella is not too bad, after the huge climb. It is mainly through snow and takes around half an hour to get there. There is no sunrise to be seen though as it is totally clouded in. It’s cold and miserable.

We decide to head onto the summit. In theory it is a 200 metre ascent (from Gillmans to Uhuru) over a 2 km track so only a 1 in 10 rise. However this is arguably the most exhausting part. We’ve been ascending for over seven hours and our pace is slow. Even the smallest rise exhausts us. Hell, even getting your water bottle from your pack is exhausting. And the water is mainly frozen solid.

There is a great companionship though. Those on their way down from Uhuru give you support and say not far to go, They high fist bump you and say you can do it – even though many are strangers. But the time stretches on and on, and we can’t see more than a score of metres ahead, so can’t tell how far to go. 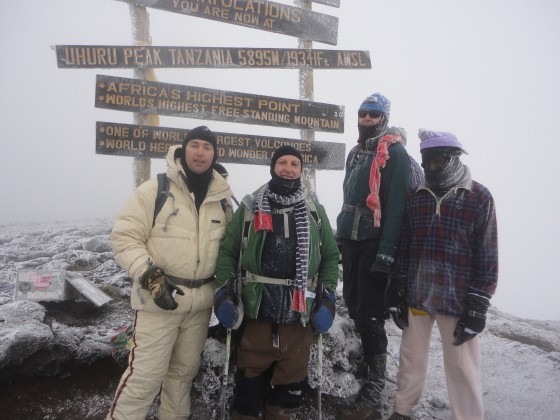 Finally around 7.15 am we make the summit. Trekkers and guides hug. It is freezing so we do a few quick photos. There are no beautiful sights to see, but nothing can detract from having made it. It hasn’t snowed (yet) but my scarf has frosted over, and I’m told there is ice on my eye lashes. So yes the smiles are rather forced!

Bruce and Chris have both tramped and a lot, and are very fit. They agree that the section from Stella to Uhuru was a b**ch. We have no energy left, but staying put is not an option, so we start the trek back down. 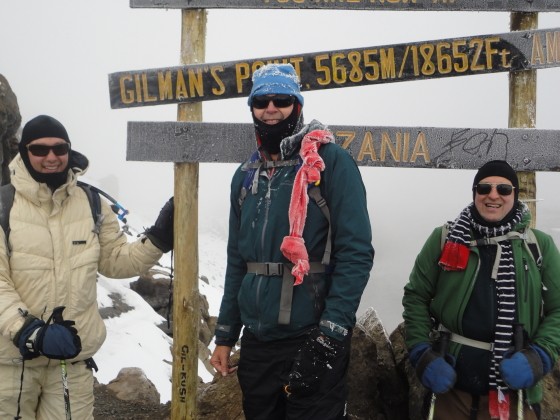 We get back to Gilman’s and it is now light enough for a photo. 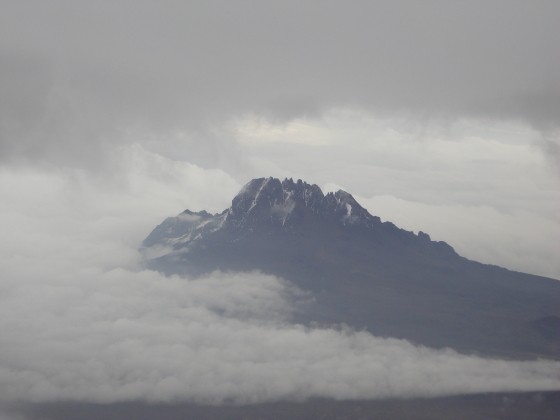 Then something cool happens. The cloud lifts for around 60 seconds and we get a view of Mawenzi. 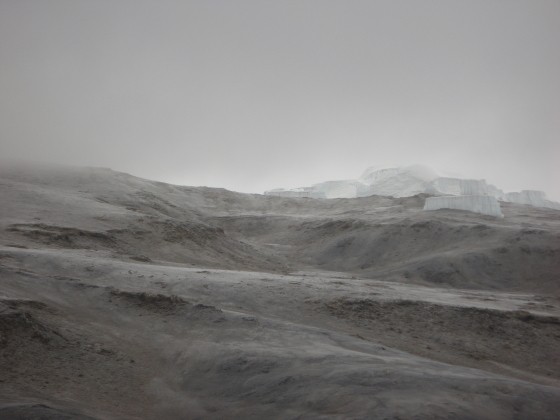 We also can see some glaciers a short way from where we are. 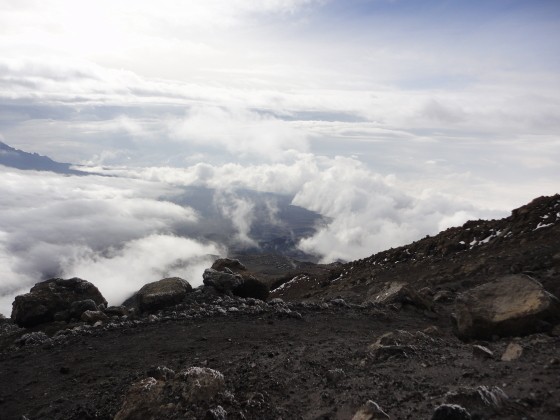 Now it’s time to head back down. The clouds below look like crashing waves.

The trek down to Kibo Hut is faster than the trek up, but still painful and exhausting. With three pairs of socks on, my toes are pushed up against my boot tips as we descend. I routinely let out yells of pain as my big toes get mashed. When I finally get to a hut, I discover that the blood and bruising on the toe is so much, that I may need to get the nail removed.

A fair potion of the way down is scree, and you can almost ski on this for a rapid descent. But doing so is incredibly exhausting and the descent takes around three and a half hours from Uhuru.

As we descend, and can now see, we’re amazed at how much territory we covered coming up. We decide that the reasons they send us up at night, is because if you could see the full distance you had to climb, you’d give up early on. The path down keeps stretching further and further. 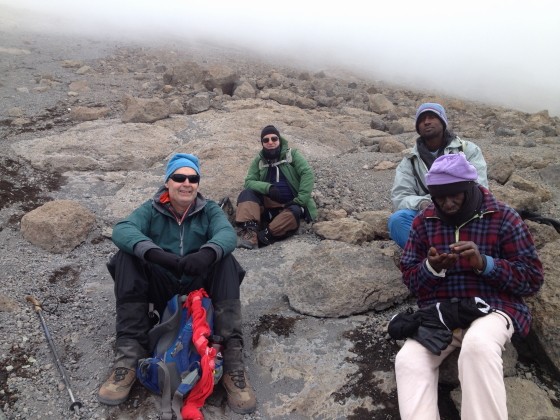 We have a couple of breaks on the way down and then around 11 am get back to Kibo Hut – 11 hours after we left. The cloud got so thick we could only see the hut once we were 20 metres from it. In some ways the descent was more unpleasant than the ascent.

I’m freezing and jump into my sleeping bag. I appear to have some mild hypothermia as I’m shivering even in several layers of clothes, a thermal liner and a sleeping bag. Even with my Down Jacket on, I’m shivering. The problem is you lose the heat from moving, once you stop.

We learnt the rangers decided to take Basma down by gurney as she was so exhausted. She’s not alone. A total of five trekkers out of around 30 in total were evacuated by staff due to exhaustion, sickness or hypothermia.

I seriously can’t face around three hours of trekking down to Horombo Hut and consider spending the night at Kibo. But I drag myself out of my sleeping bag, grab a quick lunch (beef stew, yum) and around 1 pm we start off on another 1,000 metre descent.

The flat saddle area is pretty manageable, but the final hour is spent going down the lower track to Horombo, and it is a steep track, full of boulders and rocks like on a rover bed. It makes the decent more exhausting, and damages my toes a bit more. We get a mixture of snow, hail and rain on the way down.

With relief we hit Horombo Hut around 4 pm. We’ve been trekking for around 20 of the last 32 hours. An early dinner and we hit the hut to crash.

We’re all coughing quite a bit – presumably from the cold. Hopefully not something worse. I feel a bit feverish and take my temperature and find it elevated.  And of course our muscles are aching. My last thought as we go to sleep is that I’ll be detained at the NZ border for sure as an Ebola suspect – coming back from Africa with a fever, a cough and barely able to stand up.

My other thought is that no matter how much pain was involved, a huge sense of satisfaction to have made it. I do tell Chris B though that he shouldn’t invite me to whatever stupid idea he has for his 50th birthday 🙂