Ireland is the first country in the world to approve same sex marriage by popular vote. In all other countries it has been the legislatures or judiciary.

Ireland is a profoundly religious and Catholic country, but they have voted 62% to 38% in favour of a constitutional amendment to allow same sex marriage – a landslide result.

Ireland is 84% Catholic and only 8% Atheist.

Marriage may be contracted in accordance with law by two persons without distinction as to their sex.

In 10 years time, I doubt there will be a single western country that doesn’t allow same sex marriage and the next generation will look back on the days when it was banned with the same puzzlement as today’s generation regard segregation in the US. 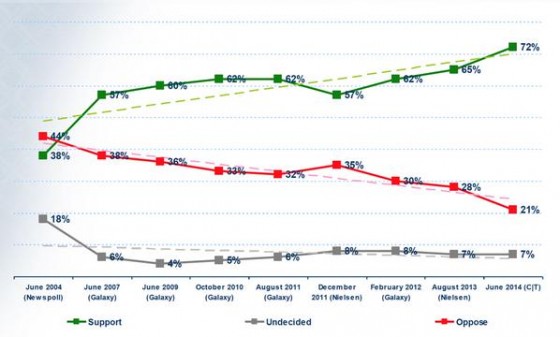 This graph (HT: Mark Textor) shows the massive change in just ten years in Australia.  In the US support is at around 60%. Again, it won’t be an issue at all for the next generation.