Figures from Statistics New Zealand showed the average price of two litres of milk was $3.19 in May 2013, which had jumped to $3.45 in May this year.

The milk price index has actually dropped 4% in the last 12 months, so Labour are complaining at the time milk prices are dropping.

What do they look like over the last 15 years? 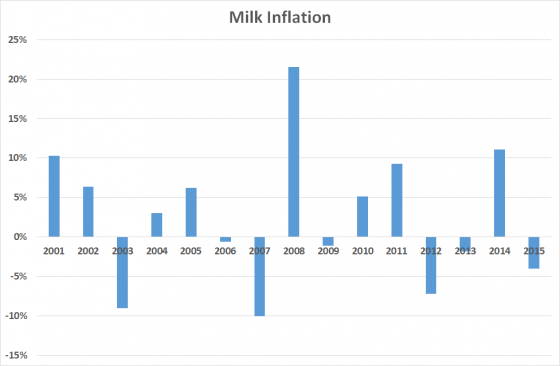 So milk prices in NZ are quite volatile, with some big increases some years and big decreases in other years. That suggests a competitive market.

In the six years and five months since 2008, milk prices have increased just 8.5% overall. That’s an average of 1.3% a year – so below the mid-point of the inflation target range.

Now let’s go back to the comparison with Coke

Shearer said Primary Industries Minister Nathan Guy had some explaining to do, as it was “all looking a bit too cosy”.

It was “perverse” that Coca-Cola was more affordable than fresh milk, at a time when child obesity and diabetes were causing major problems in the health system, he said.

First of all the Government does not set the prices of goods. It is no surprise that something which is basically water with some mass produced syrup costs less than milk which has to be produced on a farm and transported.

But even putting aside the stupidity of the comparison, let’s like at the price increases of soft drinks and milk since December 2008.

Milk inflation has been 8.5% while inflation for “soft drinks, waters and juices” has been 21.7%. So under Labour coke was even cheaper than milk!

Now Stats NZ also has the specific average price for a 2 litre container of milk and a 1.5 litre soft drink. If we make this a cost per litre what does it show? 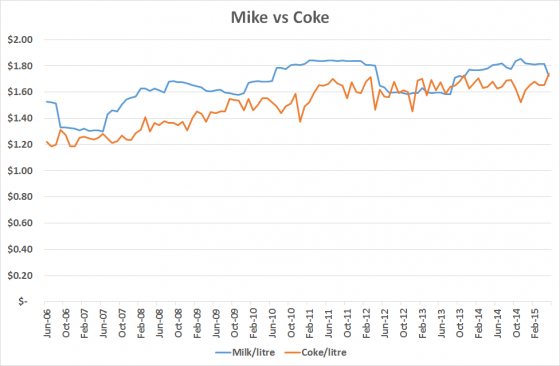 But we should not just blame Labour for not doing their homework. They were counting on media who would not fact check them. This took me around 30 minutes with the Stats NZ database. Wouldn’t it be great if a journalist actually did this and when Labour spout off crap like this, ask them questions such as:

The only way Labour will learn not to shoot off stupid inaccurate crap, is when people call them on it.

UPDATE: Kudos to Claire Trevett who in this article did look beyond the spin from Labour, and point out prices had dropped in the last year.