Kiwiblog foreign correspondent Cactus Kate bravely attended a Donald Trump rally on behalf of Kiwiblog, so she could report back on what is actually happening there:

“I don’t care much for the chances of ever implementing Donald Trump’s “feed me less” tax policy coupled with promised massive spending or his ridiculous stance against gay marriage.  I also don’t care much for the identity of the US President because alone in the US political system they cannot make that much a difference in the real world.  Obama has proved this to be true more than any other.  So many promises and hope and yet so little delivery for his adoring fans.

Trump admires marriage so much he has had three weddings and god knows how many women on the side, but with an open mind I travelled down to San Pedro for the day to the USS Iowa for Kiwiblog to hear Trump’s short impromptu rally to Veteran’s For a Strong America, a group who have now curiously endorsed him.

The most appealing proposition was to go on a battleship. I mean who is going to turn that down? I’ve never been on a battleship. The event with national anthem, pledge of allegiance and chants of “Trump” was as spectacularly American as the post Summer Slam WWE Monday Night Raw I attended last month in Brooklyn. 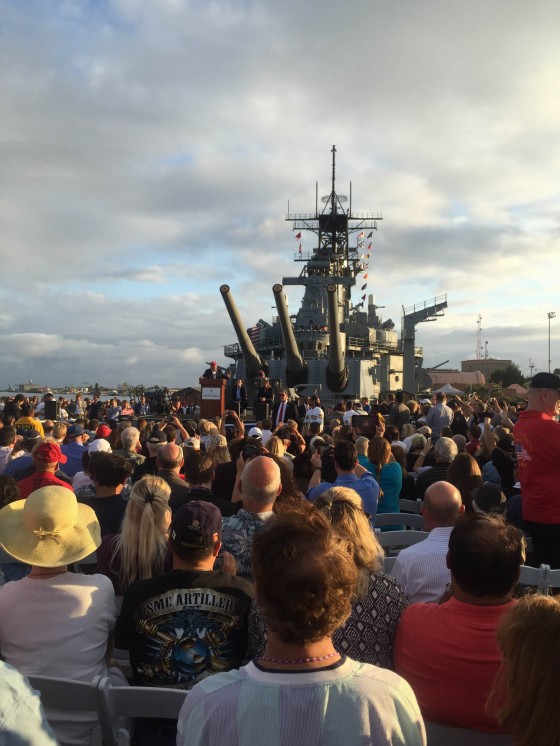 Yes I too like possibly hundreds of million if not a billion  people would like to live in the USA but I can’t. I can only spend 90 days at a time here then I have to leave and re-enter and woman-up to the bitchy face customs again. Unlike the many illegal economic immigrants (and they are not refugees) crossing the border from Mexico still, I accept this law and the sovereignty of the USA attached to decide who she likes to have living and visiting here and for how long. I wasn’t alone in the paying audience some who had parted with $1,000 for their seats. The impotent rabble outside whinging don’t understand this. Yes even us white folk from nice countries like New Zealand have to follow immigration laws. Shocking.

Every speaker reminded the crowd that men and women fought so the rabble could come and protest. Every speaker also reminded the crowd to large applause that illegal immigrants were receiving better healthcare than these veterans. The protestors were better behaved and orderly than anything outside a National Party meeting. This may though have something to do with a thousand Americans coming on and off a battleship, many veterans and many very possibly packing heat.

Donald Trump, who once famously appeared on WWE fighting Vince McMahon in the “battle of the billionaires” (when neither actually probably was) make no mistake is a show biz politician. But then so really was Ronald Reagan and today Trump will be joining the other candidates debating in his library. Reagan didn’t turn out too badly. Fortunately David Farrar’s influence with the GOP didn’t extend to getting me a ticket to that yawn fest and I can do something more American like go to the movies and eat the world’s largest popcorn and drink the world’s largest coke.

Trump has turned himself into the candidate of the people. the anti-candidate. Like in New Zealand the Beltway typically do not understand the voters at all and like the repeater from NBC behind me who repeatedly falsely claimed the protestors were drowning out the speakers, misses the point of Trump completely.

The Media Party were in attendance, just like in New Zealand they overblew the protestors and focused on the most radical people in the audience they could find to say things.  The star was a young Mexican man who like plenty in America actually arrived and are here legally and support Trump’s most outrageous campaign wish – to erect a wall on the Mexican border and have Mexico pay for it.  I doubt this young man’s soundbites were cut in any other way than to make Trump sound Mexican-hating. 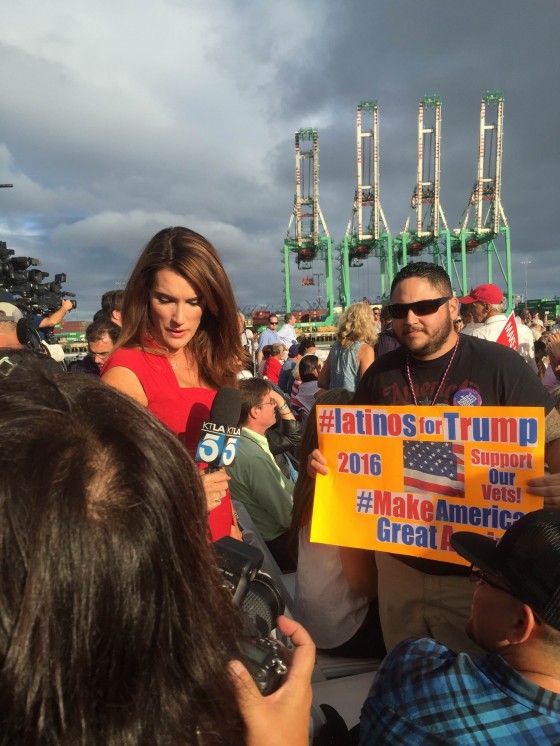 So in Trump we have an otherwise dodgy loud multi millionaire telling us that he is the rebel and the underdog. He’s not a Bush (my wife is Mexican and I speak Spanish) or a Clinton (my husband is Bill and you may like to wink wink pay his “speaking fee” instead of donating directly and openly to my campaign). The Republicans with Bush, Cruz, Christie, Huckabee, Rubio and Trump have what I would only studiously term some very serious chop chop to execute before the inevitable face off with The Robot that is Hillary. The woman best remembered as extorting her husband into standing by her side for her Presidency charade after forgiving him for blowing a cigar in the vagina of another woman.  Oh and don’t forget The Hill-bot from her private server has personal emails so boring that someone should really check her pulse regularly.  The best thing her campaign team could do right now is to leak some fabricated dirty emails between the Clintons just so some voters may actually believe they are real.

Don’t get me wrong Trump’s few announced policies make absolutely no sense and from a purist point of view he has been and will get destroyed in debates. But he is a candidate for our time. He can get away with blue murder on the campaign trail and needs to keep doing precisely what he has been doing – letting loose. This is what makes his campaign a must watch and why tickets are being scalped to attend these sorts of events. It is theatre at its finest. I couldn’t work out however if this woman was Trump’s hairdresser or a repeater not that interested in interviewing people accurately: 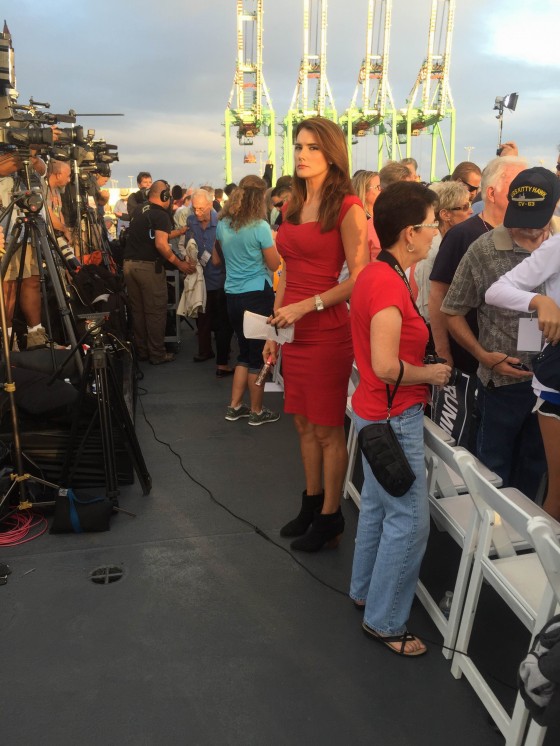 Middle America are dismissed by idiotic polisnobs (such as the knobs on Twitter polluting us all with their free snide opinions) as “uneducated”. These people are anything but.  They *are* America and they all vote and unlike the illegal immigrants all up in arms at Trump and having the political left speak for them, they’re actually eligible en masse to vote. Many like WWE, actually understand Honey Boo Boo, Duck Dynasty, shooting, God and the NRA. Underestimate their power at your peril. America isn’t about Los Angeles and New York, what the tourists and stereotypes on exported TV are. The bits in between are the most important and unless you have spent a decent amount of time with actual Americans not the Democrat liberal flower apologists for America you will misunderstand this.

I sat next to a man who had served on the USS Kittyhawk. To say he was euphoric about Trump is an understatement. Every second he seemed to turn to his wife and grab her hand harder, every word was induced through first the nose then the lips like a fine glass of Screaming Eagle. During parts of the speech the entire row of buttocks surrounding me came off their chairs with glee. Trump has made this Presidential race exciting.

The issue the Democrats will have with Trump is that he isn’t really attracting the religious far right who will infect his campaign. They are uneasy with him. Therefore to campaign against him they can’t write him off in one carefully constructed poll driven swipe.

The best they are doing now is predictably calling him racist and that he is a joke.  Having stayed at the Trump Soho last month I can report that there is no race boycott at that hotel and many of the guests were African-American, most of the entertainment at the hotel were too.

Trump’s blatant sexism and snide off the cuff remarks aren’t motivated by religion. I don’t think he’d really care about a lazy abortion or two with his shagging record or to beg and bully any mistress to actually have an abortion if the need arose so I think he’s just genuinely repulsive in a way that you would get in New Zealand if you crossed Bob Jones with Winston Peters if New Zealand had a Presidential race.

That though makes him genuine and dare I say it from polls currently and what I saw on the good ship USA Iowa with slogans such as “illegal immigrants get better healthcare than Veterans”, “the silent majority are not silent anymore” – fast becoming in a diverse land still ruled by middle America, highly electable.

Just when you thought that Trump couldn’t get any more theatrical he insists like a Commander on leaving the ship first for his waiting limousine, stopping right in front of the protesters and smiling and waving at them.

It is enough to make the left wingers and professional protesters who forget what they are actually angry about, spit out their Taco Bell.  Which is why Trump should always be welcome in this Presidential campaign and why it is not the worst thing in the world if he ends up as President. 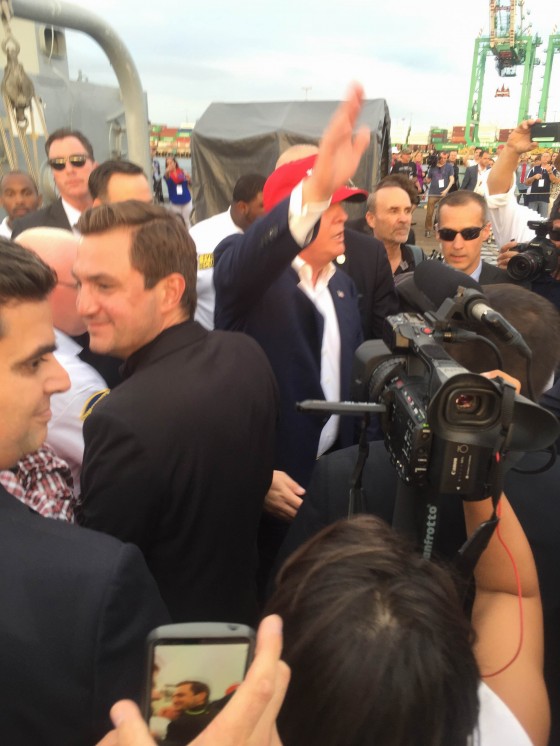