The Travelling Squirrel was written in 1987 and produced only once in 1994. It has been resurrected for Circa this year, directed by Susan Wilson.

Despite the passage of almost 30 years, it is not at all dated. In fact it seems better suited for today, than possibly the 1980s. 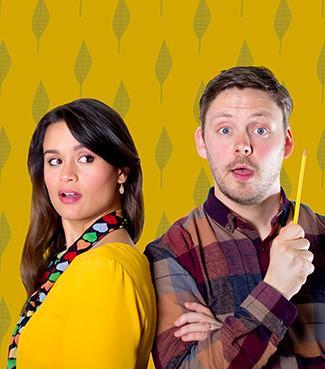 The play is essentially about a couple, Bart and Jane. Bart is an unsuccessful writer and Jane a very successful TV star. They are played by Paul Waggott and Acushla-Tara Sutton, who have some real chemistry together.

Bart would like nothing better than to have a quiet night in with Jane, enjoying a “picnic” (code for getting it on, based on their initial meeting when they picnicked next to each other). But Jane needs to get her profile up and attend society parties in New York.

The parties are hosted by gossip columnist Wally, played hilariously by Gavin Rutherford.  His lusting for the hunky waiter Daryl, provides much comedy.

You also have Jane’s social climbing friend Julie, performed by Carrie Green. Sarah is the brash illustrator played by Claire Waldron and Terry the arrogant publisher who has more interest in Jane than in Bart’s book.

But where does the title come from. Well Bart talks often to a squirrel in Central Park he has called Roger. And most days he invents great tales of what Roger has been up to, sharing them with Jane and others. Bart projects himself onto Roger.

He finally finishes his book, but the publisher is not interested in a collection of prose. However the tales of Roger the Travelling Squirrel are another thing, and suddenly Bart is on the verge of becoming a literary blockbuster, while at the same time Jane’s career is in trouble.

The second half of the play focuses on the changed dynamics as Bart is the one heading out to the parties, and Jane is the struggling one.

Will their relationship survive? Will either of them be successful? Who will Daryl end up with?

The play was two hours long, and kept a good pace. The acting was excellent, and there were lots of laughs. However I did find the plot not as good as it could have been. The ending was slightly predictable, and less than satisfying. There wasn’t any great moral lesson, just a possible redemption. Still a very enjoyable show though.

It is on at Circa until Saturday 2 October.