A guest post by Matthew Jansen, Secretary of Care Alliance:

Yesterday Kiwiblog posted a link to, and extensive quotes from, The Age story about an elderly Australian couple who last year committed suicide simultaneously.

The story was an affirmation of the decisions made by the couple, and their daughters’ respect for it. (Actually, two of the three daughters. The third daughter’s voice was not present. Hmmm.)

There were a number of details in the story that made me pause. Take this one:

About four years ago, Pat and Peter’s resolve to stay away from hospitals was heightened. While hanging washing in the backyard of their beloved home, Pat, then 83, tripped and broke a bone in her thigh. She was carted off to the emergency department.

To me, that small detail reveals the Shaw’s determination to make the facts fit their theory.  Paternalistic medicos are the problem, they had decided, therefore the paramedics treated her without appropriate dignity. They ‘carted her off’.

The story reveals that the Shaws were long-time supporters of Philip Nitschke’s Exit International. They therefore approached growing older with a particular set of expectations and plans. It’s called confirmation bias.

The story makes clear that the Shaws were not terminally ill.  Mr Shaw was concerned that he could not follow the arguments in the Quarterly Essay as he once had. Anny, one of the daughters, thought that her parents “were tired. Even a bit bored, she thought.”

And these are meant to be the reasons for approving state-sanctioned and state-provided assisted suicide? Seriously?

The Shaw’s story is entirely consistent with the experience of assisted suicide in Oregon: wealthy, well-educated people who have had all the advantages of a good life, convince themselves that they could not, or simply do not want to, bear anything less than what they have had. So they want a law that suits their circumstances, and to hell with the consequences for other people who have been less fortunate.

Or as Mr Shaw is quoted as saying “I am not afraid of dying but I am afraid of pain and incompetence.”

The international experience in Oregon, the Netherlands, Belgium and Switzerland is absolutely clear: the vast majority of assisted suicide cases are not for physical pain, but for social and psychological reasons. They are about fear: the fear of becoming less than we have been, less than we want to be, and of being abandoned.

This is the heart of this debate: people who say “I’d rather be dead than live like that” are implicitly (and in Matthew Parris’s case explicitly) saying that it is right and appropriate and legitimate to believe that some people – the “incompetent”, the disabled, the ill, the elderly, the different – are simply better off dead.

I think that’s wrong. I think the better response to such fears is to address them directly, and to support the person and their whānau to live their life fully. It’s more difficult, it’s certainly more expensive, but it is better.

There was one concluding irony at the end of both The Age and Stuff websites: they published contact details for suicide prevention services.

If suicide is okay, and assisted suicide is even better, who would decide who deserves suicide prevention services? 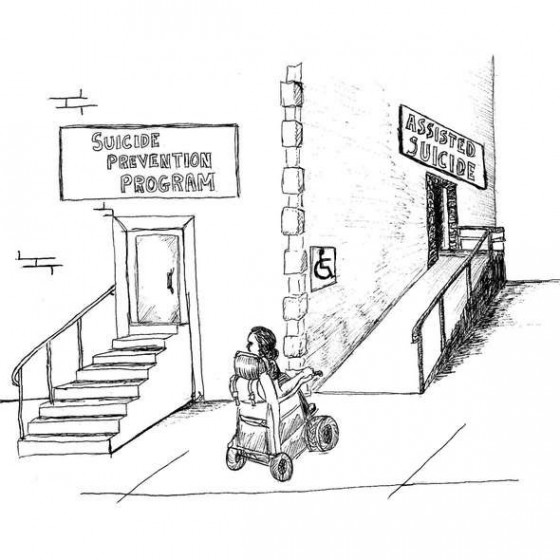