Like most of the world, I’ve been wrong at almost every stage about Trump in terms of public support. He has broken all the rules and is on track to win a clear plurality of Republican delegates, maybe even a majority.

He has attacked pretty much every senior figure in the Republican Party, is campaigning against free trade, and says appalling things, yet his support continues, and even grows.

This post is an attempt to answer that question. There is no one answer, but multiple factors. First, and maybe the most important.

When I say Americans, I don’t just mean Republicans and I don’t mean angry (that is a subset). Americans have been unhappy with the direction of America for around 12 years, and in fact for most of the last 35 years. 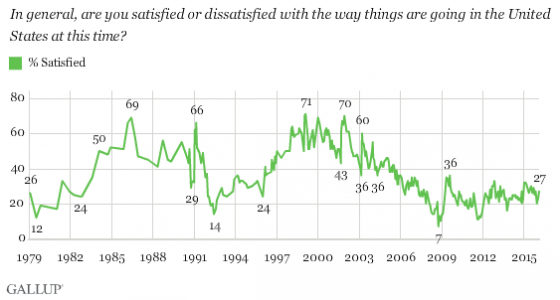 This shows the percentage of Americans who say they are happy with the way things are going in the US. If it is over 50% then most Americans are happy. At present it is just over one quarter. 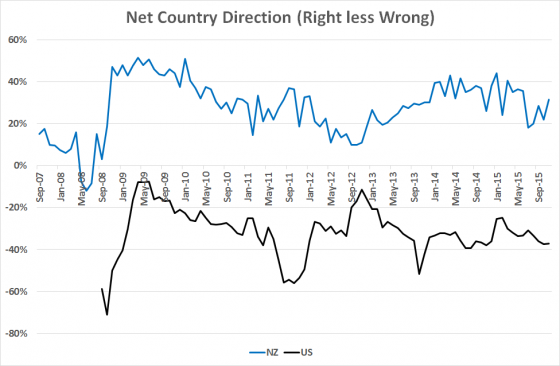 This malaise is not shared in other countries. This graph compares the net (positive less negative) direction in the US and New Zealand.

So Americans are disillusioned with the country, politicians and the parties. Up to three quarters of Americans think their country is heading in the wrong direction, and they are looking for a way to change that.

This explains some of the appeal of Trump (and Sanders).

Trump’s slogan of Make American Great Again is very appealing to many Americans. They want to be proud of their country. They think the US is an exceptional country. They feel let down. Trump is no Reagan but he is tapping into the same vein.

Key even tapped into this somewhat in 2008. He never did an Angry Andy and said NZ is an awful place due to the Government.  Key said NZ is a great country but can be even better. Trump’s tactics are different (he blames stupid politicians) but he is appealing to people’s pride in the country (even if unhappy with the direction).

Politicians on the left struggle with this. How does Obama make people think America is a great country, when he hand wrings about Guantanamo Bay, racism and the like. This isn’t saying Obama is wrong, just that getting the tone right is a challenge.

3, A backlash against political correctness

Trump’s statements banning all Muslims from migrating to, or even visiting, the United States are deplorable. But they have struck a chord, Why? Because people feel they can’t even discuss the problems of Islam and extreme Islam.

When there is a terrorist attack, the President can’t even call it Islamic terrorism. They laughable “Islam is a religion of peace” line is trotted out in all the media. People feel they can’t have an honest and open debate about the serious problems within Islam (such as over 30% of Muslims worldwide support executing people for apostasy).

So when Trump comes out and says “Ban all Muslims”, people feel that it liberates them to at least be able to say what they think. You saw this in a different way with Brash’s Orewa speech. Brash’s speech was nothing like what Trump has said, but it struck a chord as the political elite had ruled such conversations off topic for so long.

So at one extreme you have Obama unwilling to even use the term “Islamic terrorism” and at the other Trump saying “Ban Muslims from crossing the border’. It is one extreme that creates the other. This is not to say anyone but Trump is to blame for what Trump says – he is. But the reason he has found such support, has been the politically correct climate where politicians and others have to measure every word they say.

4. Blaming someone for all the problems

Winston is the master at this. For decades he has done well in saying that everything would be like it used to be (he thinks the 70s were a golden age). if it were not for some group to blame. That group for Winston has ranged from Asian immigrants to Big businesses.

Trump has made it simpler. He blames stupid politicians. Everyone but him is stupid, and all will be well if he is President. He will negotiate better deals, scare all the enemies, and get Mexico to pay for a wall – because he is super smart and everyone else is dumb.

Politicians are a good target for blaming everything on. Their approval rating (generically) is normally below 20%.

Tied to the above, there is a long history of non-politicians appealing. In NZ both Brash and Key did very well because they were not seen as career politicians, but people who have succeeded outside of politics.

6. People don’t expect Trump to do exactly what he says

Many of us have gone wrong thinking that people won’t support Trump because his so called policies are impossible to achieve and implement. Take these three:

But Americans may be smarter than we give them credit. I suspect few of his supporters expect him to do exactly what he says. But what they like is what he is effectively saying, which is:

So they are responding to his direction rather than his specific policies.

7. Trump doesn’t have to worry about relationships

Trump is the insulter in chief. It gets him great air time, and his supporters love it. He can do it, because he is not a politician. He is not even that interested in whether the Republican Party does well. He just wants to be President. Other candidates have political careers and need to work with others. They have to be restrained in what they say.

8. There is no effective Republican establishment leadership

Us parties are very different to NZ parties. The US parties are more brands than unified parties. This is why Trump and Sanders can come in and be viable. Unless you hold the Oval Office, then your party has no clear leadership. The RNC Chair is not very powerful.

So when people say the establishment is failing to stop Trump, that is partly because there is no single establishment figure who can bring everyone together and say “This is what we are doing”

Trump has said more false things than any other candidate in recent history. But he never ever admits he was wrong. While this is off putting to some voters, he has shown that you can brazen things out. This may probe to set a very bad incentive for future candidates.

Trump doesn’t need to spend money for publicity. One tweet from him generates 200 stories. This has helped him dominate the media.