The final post looks at views of New Zealanders on various issues from the NZ Election Study.

The first two, and most important are has the Government done a good job and has the economy been good or bad.

73% of NZers said the Government had done a good job in the last three years and only 21% said a bad job.

That’s a staggeringly low level of people saying the Government had done a bad job.

NZES asked about whether we should be spending more,  less or the same in various areas. The table below summarises this:

Health and education stand out as the two areas NZers most want more spending. This is no surprise. They have a net 65% support.

After that is housing and law enforcement on around net 40%.

The three areas where NZers want less spending is defence at -1%, welfare -20% and unemployment benefits -29%.

Then they asked NZers if they agreed with a series of statements, that are below. 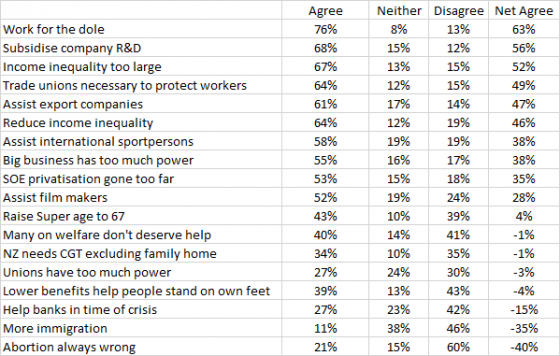 The biggest agreement at net +63% was people should have to work for the dole.

Next biggest agreement was that Government should subsidise or assist companies with research and development followed by income inequality is too large and should be reduced, unions are necessary to protect workers and exporters should get financial assistance.

NZers also think big business has too much power, we should assist international sportspersons and film makers and SOE privatisation has gone too far.

There is modest agreement raise the super age to 67 at +4%.

Minor disagreement at -1% that many on welfare don’t deserve help, that NZ needs a Capital Gains Tax, unions have too much power (-3%) and lowering benefits helps people stand on their own feet (-4%).

More significant disagreement that the Government should help banks in times of crisis (-15%), we should have more immigration (-35%) and abortion is always wrong (-40%).

Also some voting issues were canvassed.

Huge opposition to reducing the voting age to 16.