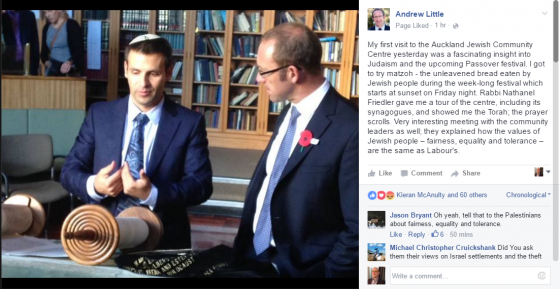 Andrew Little posted on Facebook about his visit to the Auckland Jewish Community Centre.  A very nice post from him about the Jewish community.

Sadly the comments on the post (and no I don’t blame him for them) show how antisemitism is alive and well in NZ.

Jason Bryant doesn’t seem to understand (or care) about the difference between the state of Israel and Jews living in New Zealand. This is as bigoted as blaming the actions of Saudi Arabia on a New Zealand Muslim.

But it gets worse. 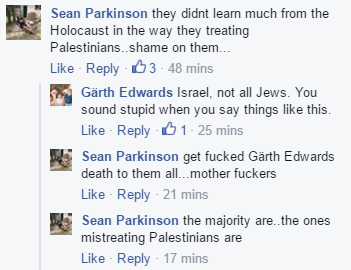 Sean Parkinson actually calls for death to all Jews. What a lovely chap. Would have been right at home in Nazi Germany. 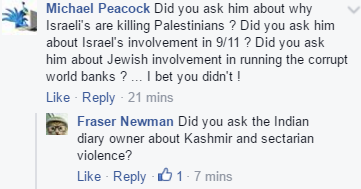 And then we also have Michael Peacock with the conspiracy theories that Jews were behind 9/11 and running the world banking system,

They so hate Jews they can’t even see the point being made by Fraser Newman that blaming the actions of one country on all jews is like blaming the Kashmir violence on all Indians.

Quite sickening that such a positive post by Andrew Little gets such vile comments.