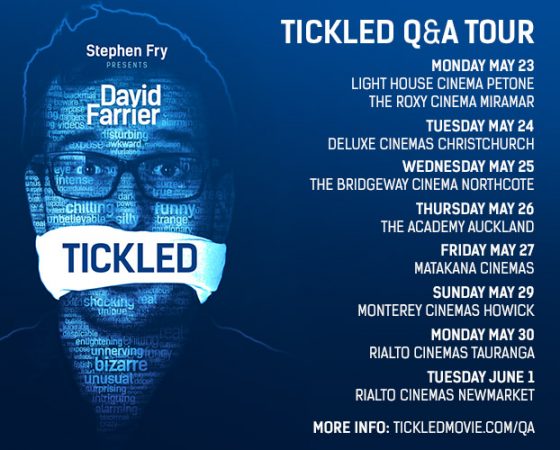 I was one of the hundreds or thousands who helped crown fund this documentary, which has had rave reviews, and even been promoted by Rolling Stone magazine. Hollywood Reporter reviewed:

When David Farrier came across social-media notice of a “competitive endurance tickling” event in Los Angeles, he thought he’d lit upon another amusingly weird topic for his lighthearted reports on New Zealand television. But the Donkey Lady, frog-eating survivalists and Justin Bieber were nothing compared with what the pop-culture journalist would uncover.

In the captivating and jaw-dropping Tickled, he and fellow first-time director Dylan Reeve chronicle an investigation that would take them down a rabbit hole of legal threats and private investigators, leading to a mysterious deep-pocketed exploiter of young men in the name of a fetish subculture. But the erotic-torture appeal of tickling (who knew?) is only a piece of the suspenseful puzzle. In its genial, low-key way, the film, premiering at Sundance, is a chilling account of cyberbullying, perpetrated on a disturbingly wide scale over many years.

I’ll be moderating the Q+A at The Roxy after the 8 pm showing on Monday 23rd, so if you want to see it in Wellington, come along to that session.