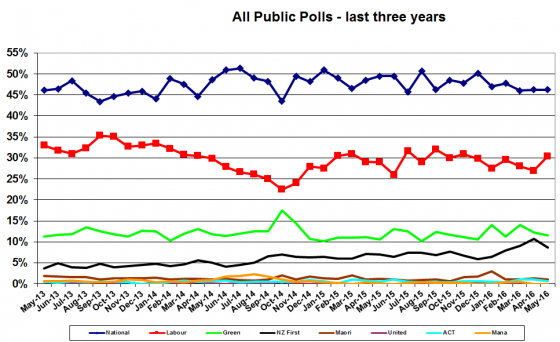 Curia’s monthly newsletter is out. The summary is below:

There were two political voting polls in May 2016 – a Roy Morgan and a Newshub Reid Research.

The average of the public polls has National 16% ahead of Labour in May, down 3% from April. The current seat projection is centre-right 58 seats, centre-left 51 which would see NZ First hold the balance of power.

In the United States Clinton’s chances improved in May with a projected 126 elector lead in the Electoral College. Overall satisfaction with the direction of the US remains extremely low at a net -40%.

In the UK Remain is at 65% and Leave at 35% in the prediction markets. Brexit trails by 3% in the average of the polls.

In Australia The election is on a knife edge with the current seat projection being the Coalition having a one seat majority only.

In Canada Liberals remain sky high in the polls and confidence of the country direction has reached a new high of +27%.

We also carry details of polls on the Kermadecs, housing and US ship visits plus the normal business and consumer confidence polls.