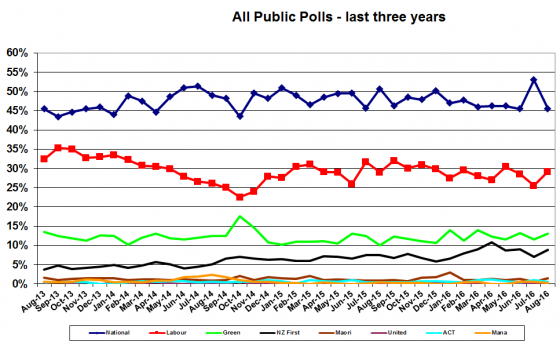 Curia’s 100th monthly polling newsletter is out. The summary is:

There were two political voting polls in August 2016 – a Newshub Reid Research and a Roy Morgan.

The average of the public polls has National 17% ahead of Labour in August, down 10% from July but the same as June. In July there was only one public poll.

The current seat projection is centre-right 57 seats, centre-left 51 which would see NZ First holding the balance of power.

In the United States the race has narrowed in August with Trump now only 5% behind and projected to have a 29% chance of winning. Obama’s favourability continues to improve.

In the UK Jeremy Corbyn’s approval rating hits a low of -33%, in stark contrast to Theresa May who is at +35%.

In Australia Malcolm Turnbull has had the opposite of a honeymoon, with his approval rating falling to -18% and below Shorten for the first time.

In Canada the dominance of the Liberals continues without challenge.

We also carry details of polls on cannabis, housing and Auckland plus the normal business and consumer confidence polls.

This newsletter is normally only available by e-mail.  If you would like to receive future issues, please go to http://curia.us10.list-manage.com/subscribe?u=e9168e04adbaaaf75e062779e&id=8507431512 to subscribe yourself