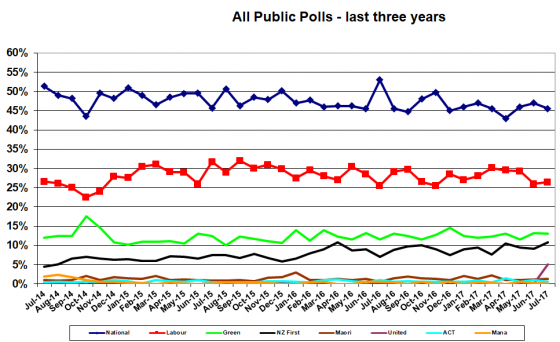 The Curia newsletter summary for July is:

There were four political voting polls in July – a Roy Morgan a Newshub Reid Research and two One New Colmar Bruntons.  The July polling led to the demise of Labour Leader Andrew Little.

The average of the public polls saw National 19% ahead of Labour in July, down 2% from June.

The seat projection for July was centre-right 60 seats, centre-left 46 which would see the Maori Party hold the balance of power.

National’s party vote is around the same as a year ago but down from three years ago.

Labour’s party vote in July was below a year ago, and three years ago,

In the United States Trump’s net approval rating has fallen 5% to -18%.

In the UK, the country direction is massively pessimistic with a net 24% decline over two months.

In Australia, both Turnbull and Shorten have -20% approval ratings.

In Canada, the Liberals increase slightly to an 8% lead over the Conservatives.