What is the maximum average annual rates increase, if any, you would vote for over the next three years?

Do you support the proposed runway extension for Wellington Airport?

DPF comment – Lee against and Bonner and Pierson in favour

What is the maximum contribution ($ or %) from WCC toward the runway extension you would vote for?

DPF comment – Lee against any contribution, Bonner favours in line with shareholding and Pierson a $90 million contribution.

Can example of current WCC spending that you would vote against in future?

Do you support four laning (through additional tunnels) the Mt Vic and Terrace tunnels at an estimated cost of $250 million?

DPF comment: Pierson supports both tunnels expanding, Lee one of them and Bonner neither

Do you support a change to the structure of local government in the Wellington Region, and if so to what?

Do you support the current closing times for CBD bars of 4am. If not, what time would you prefer?

DPF comment: Lee supports 3 am. Bonner and Pierson 4 am,

Do you think WCC should make it a condition for any business tendering for a contract with WCC to pay their staff at least $20 an hour?

DPF comment: Bonner and Pierson support the living wage for contractors. Lee thinks it should be a criteria but not a requirement.

Should fluoridation of the Wellington city water supply continue?

If Council had an additional 10% revenue, or $40 million, what would be your priority spending areas?

DPF comment: Vegemite not wanted in the Southern Ward. 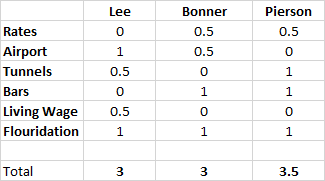 The table above is a simple scoring system of responses against my own personal views of low rates, no subsidy for the runway, four lanes on SH1, 4 am closing, no living wage requirement and pro-fluoridation.

Not a big difference between the three candidates.

The scores on policy are not the only factor in deciding how I will vote. Ability to work with others, communicate, work hard etc all factor in also.

Note Paul Eagle did not respond to the survey but from what I know of him he is a sensible and effective Councillor so would vote for him (despite his Labour candidacy).