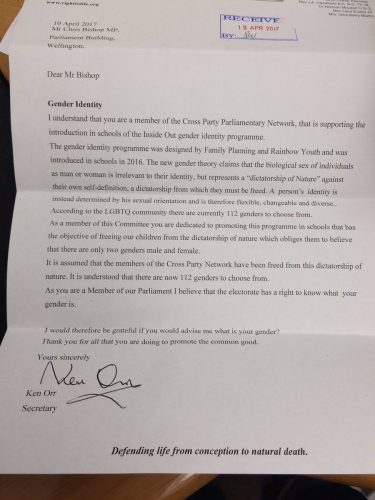 Ken Orr has written to a number of MPs demanding they declare their gender identity.

Paul Foster-Bell has replied, and said I can publish to below:

I am in receipt today of your letter dated 10 April.

While there are too many factual errors, logical fallacies, instances of deliberate misinformation, ignorant ditherings and contorted failures of reason for me to address each of these individually, I did want to respond to your key demand: the electorate’s supposed ‘right to know’ my gender identity – and that of other members of the Cross-Party Rainbow Network which I am happy to co-Chair.

Simply put, this is neither a great secret nor any of your damned business.

I fail to see how the genotype (chromosomal sex), phenotype (anatomical characteristics), psychological gender identity or sexual orientation of any individual holding public office – be it in a parliamentary, policing/judicial, governmental, military or media capacity – is in any way pertinent to their ability to execute the requirements of their role.

One of the great privileges of being an MP has been meeting many amazing people who personally exemplify the fact that members of the LGBTIQA community can become high achievers who contribute much to our society. This ranges from our most senior public servants, to highly courageous military officers, to leading clergy in several different denominations, to the captains of industry.

Having taken some time to browse the ‘Homosexual Agenda’ section of your website, all I can say is thank goodness for Family Planning and Rainbow Youth, among other organisations, for their provision of helpful advice derived from the lived experience of people who do not conform to traditional gender/sex/sexual orientation norms. These views inform sensible policy and allow us to develop useful resources such as those provided by InsideOUT.

In my role as a Director of Commonwealth Youth NZ I was very pleased to see InsideOUT’s National Co-ordinator Tabby Beasley honoured for her work with a prestigious Queen’s Young Leader award. I am delighted that the helpful teaching tools InsideOUT have provided are being deployed in the curricula of New Zealand schools, and generally well received by young Kiwis who are increasingly open-minded compared to previous generations. In my view, these tools are instrumental in countering the ignorance perpetuated by organisations such as yours.

I’m proud to be part of a Government which cares for all New Zealanders, including those from the most vulnerable minorities. These groups may be small in number. But they have the same right to a safe school environment, and a sound education underpinning the achievement of their hopes and dreams, as any other citizens of our great country. Hopefully, in time, your organisation will develop a more compassionate and better informed view on these issues rather than following your current trajectory, which seems to be lapsing into a latter-day Holy Inquisition.

If you write such a stupid letter, you should expect a robust response.