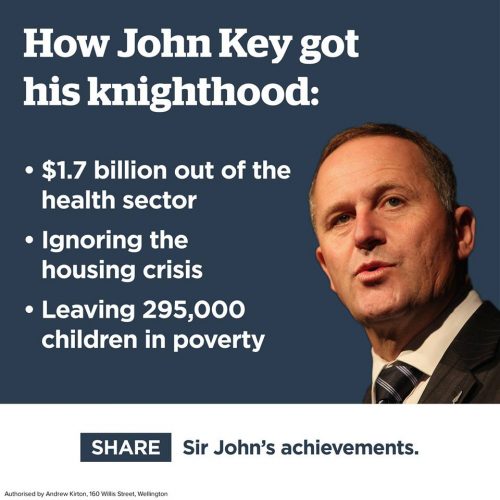 What a bunch of lying embittered losers.

Once she was out of politics, John Key gave Helen Clark the highest Honour there is – Order of New Zealand. He supported her campaign for UNDP Administrator and gave her 100% support in her campaign to be UN Secretary-General. He also knighted Michael Cullen and gave him significant board appointments.

Key is retired and out of politics. But the nasty losers at Labour are so choking on their bile they actually authorise an advertisement smearing and attacking him for getting a knighthood. Have you seen anything so petty before? They also repeat their lie about taking $1.7 billion out of the health sector when in fact Vote Health increased $4.8 billion in nominal terms, $3.0 billion in real terms and by over 10% in real per capita terms.

God they really are the nasty party.