It is not your imagination – something does indeed appear to be wrong with the petrol market, a government study has found.

Energy and Resources Minister Judith Collins said a report into the retail fuel market had found “features which may not be consistent with a workably competitive market.”

The gross profit margin on fuel at the pump had doubled to about 30 cents a litre in Wellington and the South Island over the past four years, and the price of fuel – ignoring taxes – was now the highest in the OECD, the report found.

​Higher profit margins in the South Island and Wellington were “not explained by higher costs in those areas”.

Collins said the study didn’t say for sure whether fuel prices were reasonable or not, but she noted the report’s authors said “we have reason to believe that they might not be”.

I think the market is clearly not competitive enough. Now the solution is not necessarily to regulate, but to look at how to get better competition. A petrol price app could be one useful tool for motorists – it can automatically tell you the cheapest price within x kms. 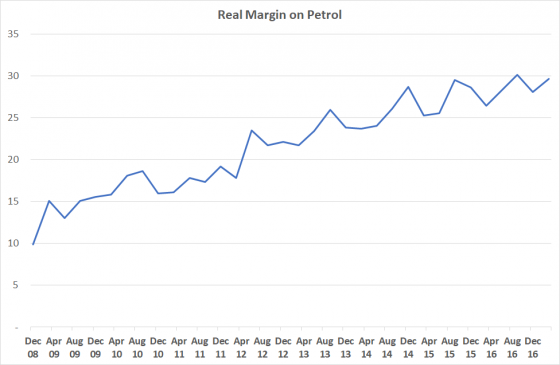 This graph uses MBIE data and shows how the margin between the importer cost and retail cost has grown in the last decade. It clearly shows there is a price and competition issue.