Speaking to Newstalk ZB this morning, Peters said that he declared that he was in a de facto relationship with partner Jan Trotman when he applied for superannuation.

There appeared to have been an alteration to his application form but “no one knows how it was made”, he said.

This is a very serious matter. It sounds like a rogue MSD staffer altered Mr Peters’ form seven years ago in order to pay Mr Peters’ more money – possibly hoping to embarass him some day. MSD surely has to investigate how the application form correctly filled in by Mr Peters was altered so it was incorrect. 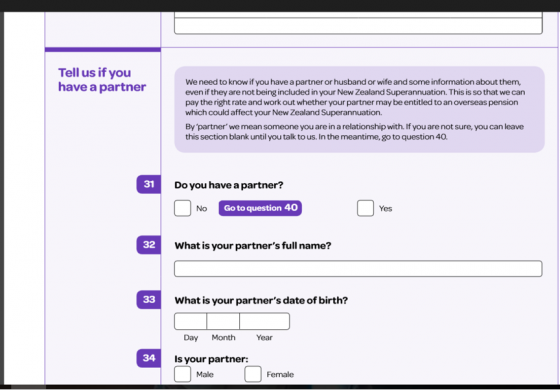 This is a copy of the application form for Superannuation. So Mr Peters would have ticked Yes and written in his partner’s name, DOB and gender. If Peters gives a privacy waiver to MSD, they can release the form that will show his handwriting on it with his partner’s name written in. This will exonerate him totally if he gives a waiver.