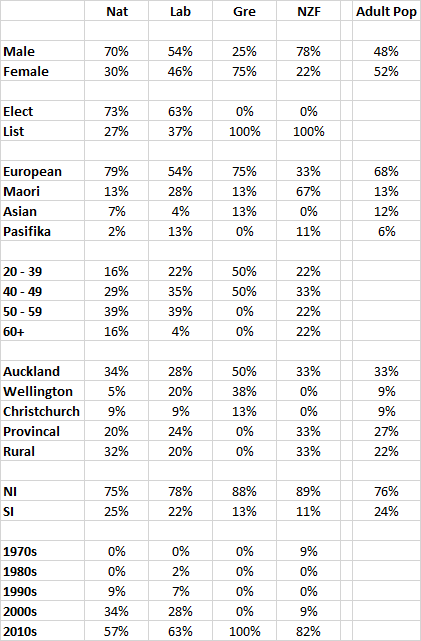 I’ve analysed the demographics of the caucuses of the four larger parties. Some interesting observations.

NZ First and the Greens are the most gender imbalanced. The Greebns are only 25% male and NZ First only 22% female. Next is National at 30% female and the most balance is Labour at 46% female.

National has 13% of its caucus with Maori ancestry, 7% Asian and 2% Pasifika. They are under-represented with Pasifika and Asian.

The Greens are fairly well balanced except they have no Pasifika MP.

Note that I do not advocate that a caucus should have the exact same proportions of MPs by ethnicity as the NZ adult population. But neither do I think it is a good thing if a caucus consists of MPs from one gender and ethnicity only. A diverse caucus that is more representative of NZ is a stronger caucus – but it doesn’t have to match exact proportions with some sort of quota.

National now has the oldest caucus while the Greens have the youngest. In fact no Green MP is aged over 50.

Labour and Greens are massively over-represented in Wellington. The Greens have no MPs at all outside the three main cities.

National and Labour fairly spot on for North and South Island. Greens and NZ First over-represented in North Island.